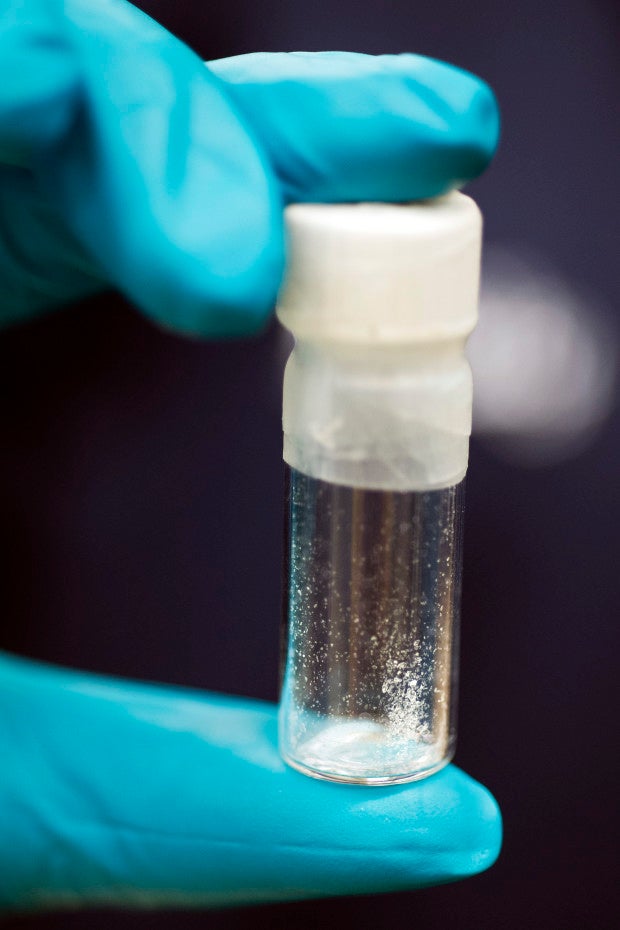 FATAL DOSE Two
milligrams of fentanyl,
shown here in a vial, is fatal
to 99 percent of users. –AP

OTTAWA, Canada – A surge in the number of overdose deaths in Canada has led to more organs being available for transplant, an official at the epicenter of the opioid crisis said Friday.

“We’ve seen more organs available for transplant and a proportion of those have been due to drug overdoses,” David Landsberg, British Columbia medical director of transplant services, said in a telephone interview with AFP.

Canada is in the grips of a deadly spike in fentanyl abuse. Highly potent and addictive, the analgesic is estimated to be up to 100 times stronger than morphine.

Two milligrams of pure fentanyl — the size of about four grains of salt — is enough to kill the average adult.

The government announced Friday a Can$75 million ($57.3 million) package to combat overdose deaths linked to fentanyl and try to curb abuse for its heroin-like effect.

The uptick in both fentanyl overdose deaths and transplants began in late 2016.

From the beginning of this year to February 15, there have been 59 organs from 20 donors used in transplants, according to figures provided by BC Transplant.

That is up from 37 organs from 10 donors transplanted in the same period in 2016.

One quarter of the organs transplanted this year came from people who died of a fentanyl overdose, said Landsberg.

The coroner in westernmost British Columbia, which has been hardest hit by Canada’s opioid crisis, reported 914 “apparent illicit drug overdose deaths” in 2016 — a 79.2 percent year-over-year increase.

Fentanyl-related deaths accounted for two-thirds of the total, it said.

The trend so far this year has not abated, with 116 overdose deaths reported in January.

The first new sites in more than a decade — also called drug consumption rooms — were approved earlier this month in Montreal. Until now, Vancouver had the only safe injection site on the continent.

At Saint Paul’s Hospital in downtown Vancouver, Landsberg said he deals “firsthand” with both tragic overdose deaths and life-giving transplants.

“I’m ambivalent about it,” he said after a pause. “It’s a mixed blessing.”

Overdose victims are treated the same as any other potential donor, according to officials. They may already be a registered organ donor, and if not, physicians may ask their family for consent.

An overdose victim could only be an organ donor if after resuscitation their organs are healthy, but there is significant brain trauma or death.

“At this point, further care is futile so doctors would urge withdrawal of life support… and look at possible organ donation after death,” Landsberg explained.

Drugs would typically have cleared the donor’s system by the time organs are removed for transplant.

However, there is a heightened concern about the possible transmission of infectious diseases, as drug addicts are considered to be at a higher risk of contracting HIV, hepatitis or other diseases, for example, if they share needles to inject drugs.

“We are worried about these high-risk behaviors, so we are meticulous in screening (organs) for infectious diseases,” Landsberg said, adding that the risk of transmission through organ transplant is “low.”

“We discuss that in detail with the (organ) recipient and only go ahead with their approval,” he said.