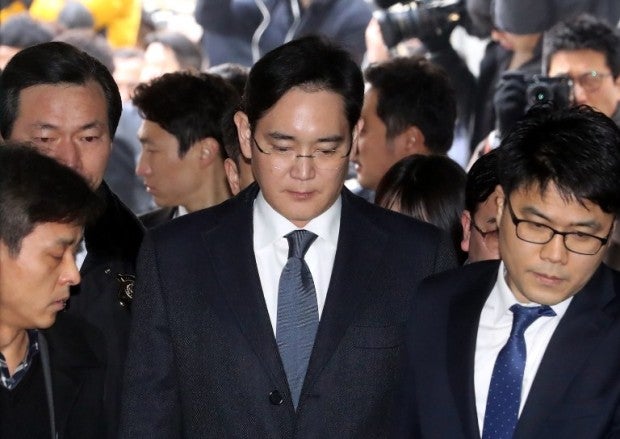 Lee Jae-Yong (center), Samsung Electronics vice chair and the son of Samsung group chair Lee Kun-Hee, arrives in court for a hearing to review the issuing of his arrest warrant at the Seoul Central District Court in Seoul on Feb. 16, 2017. AFP

SEOUL, South Korea — The heir of South Korean giant Samsung was arrested Friday as part of a probe into corruption and influence-peddling that caused President Park Geun-Hye to be impeached.

“It is acknowledged that it is necessary to arrest (Lee Jae-Yong) in light of a newly added criminal charge and new evidence,” a court spokesman said in a statement.

He was already being held at a detention center after appearing in court Thursday as judges deliberated whether to issue an arrest warrant.

Lee, the son of the Samsung group boss Lee Kun-Hee, has been quizzed several times over his alleged role in the scandal that has rocked the nation.

The 48-year-old, described as a key suspect in the scandal, narrowly avoided being formally arrested last month, after the court ruled there was insufficient evidence.

But prosecutors on Tuesday made a second bid for his arrest, saying they had collected more evidence in recent weeks.

His arrest, the first for a Samsung chief, is likely to send shock waves through the group, which is a major part of the South Korean economy and includes the world’s largest smartphone maker, Samsung Electronics.

It is already reeling from the debacle over the recall of its flagship Galaxy Note 7 device and reports have suggested it could face sanctions from overseas authorities if Lee is punished.

The scandal centers on Choi Soon-Sil, who is accused of using her close ties with Park to force local firms to “donate” nearly $70 million to non-profit foundations which Choi allegedly used for personal gain.

Samsung was the single biggest donor to the foundations. It is also accused of separately giving millions of euros to Choi to bankroll her daughter’s equestrian training in Germany.

The court is also deliberating an arrest warrant for another Samsung executive, who is also the head of Korea Equestrian Federation, over bribery charges.

Samsung said in a statement Wednesday it had “not paid bribes nor made improper requests to the president seeking favors”.

Lee has effectively taken the helm of Samsung — South Korea’s biggest business group — since his father suffered a heart attack in 2014.

Prosecutors are probing whether Samsung had paid Choi to secure state approval for the controversial merger of two Samsung units seen as a key step towards ensuring a smooth power transfer to Lee.

The merger in 2015 of Samsung C&T and Cheil Industries was opposed by many investors who said it wilfully undervalued the former unit’s shares.

But the deal went through after Seoul’s state pension fund — a major Samsung shareholder — approved it.

Samsung is South Korea’s largest business group and its revenue is equivalent to about a fifth of the country’s GDP. CBB