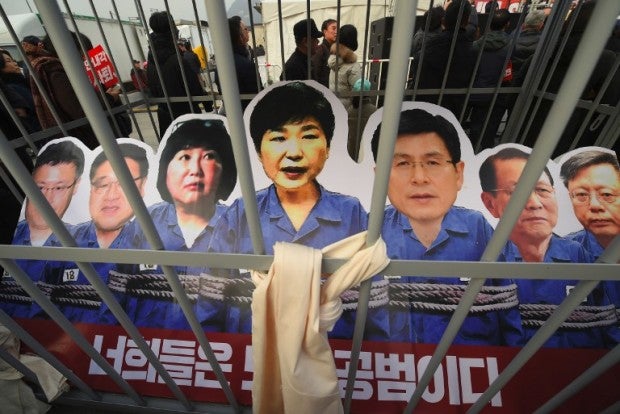 Portraits of South Korea’s President Park Geun-Hye (center) and her aides are set in a mock prison during a rally against the scandal-hit president in central Seoul on December 17, 2016. Tens of thousands of protesters turned out in Seoul for the eighth straight week on December 17, pushing for the swift and permanent removal of the impeached president. AFP

SEOUL, South Korea — South Korea’s presidential Blue House has been something of a family home for Park Geun-Hye, but the luxury residence has now become a place of solitary confinement for the impeached, isolated leader.

Park has twice called the Blue House home: first as the daughter of late military strongman Park Chung-Hee and then as president herself — a cumulative period of 20 years.

Currently president in nothing but name and with no official duties to perform, Park faces a months-long empty schedule within the walls of the complex as she waits for the final act of her impeachment drama to play out.

The only regular encroachment from outside is the deafening chanting of hundreds of thousands of protestors who have taken to the streets of Seoul every Saturday for the past two months to demand Park either resign or be removed.

Ensnared by a corruption scandal involving an old friend, Park was impeached by parliament just over a week ago — a move that stripped away all her substantial presidential powers and transferred them to her prime minister.

She is allowed to retain her title and stay at the Blue House while the Constitutional Court considers whether to validate the impeachment — a process that could take up to six months.

But her movements are restricted to the residential part of the 250,000-square-metre (62-acre) compound. Her offices, some 200 meters from her living quarters, are off limits.

A planned trilateral summit with the leaders of China and Japan that was supposed to be held this month in Tokyo has been indefinitely postponed.

Aides say Park spends her time resting and preparing her impeachment defense for the court, but otherwise there are scant details about her activities.

“She must feel like the whole world has turned its back on her,” said Lee Jun-Han, a politics professor at Incheon University.

“I don’t think she has the luxury of travelling outside the Blue House, or even resting in peace at home,” Lee said.

Park’s father Park Chung-Hee ruled the country with an iron fist from 1961-79 and his eldest child enjoyed a pampered life, although in her memoirs she described her early days at the Blue House as “prison-like”.

She never married and has no children, and critics say her sheltered upbringing left Park aloof and out of touch.

In a televised apology she gave in early November as the corruption scandal snowballed, Park spoke of her “lonely life” as president and how it had led her to place too much trust in her long-time confidante, Choi Soon-Sil.

Park’s impeachment focused on charges that she colluded with Choi in forcing a number of South Korean conglomerates to donate tens of millions of dollars to two dubious non-profit foundations that Choi controlled and allegedly plundered.

Park acknowledged letting her guard down with Choi, who had helped her through “difficult times” as a single female president who had lost both her parents to assassins and was estranged from her siblings.

In testimony to an ongoing parliamentary investigation into the Choi scandal, Park’s aides cemented the image of her as a solitary figure who liked eating alone.

One former chief of staff who served Park for two years said he had often gone an entire week without meeting her at all — an experience echoed by other senior policy advisors.

“Park was almost always in her residence, whether on Sundays or a weekday, unless there were public events like a cabinet meeting or a meeting with advisors,” a former presidential chef said in a recent interview.

Park’s staffers now report to the prime minister — and acting president — Hwang Kyo-Ahn, who is expected to give the annual year-end national presidential address.

For the Blue House press corps, Park’s blank days have left them with similarly blank notebooks.

“The number of reporters in the pressroom has shrunk a lot — maybe only a third are showing up,” said the correspondent of one national newspaper who spoke on condition of anonymity.

“There are no more regular briefings by the spokesman. He only comes to the pressroom when there’s a particular issue regarding the president,” the correspondent said. CBB/rga