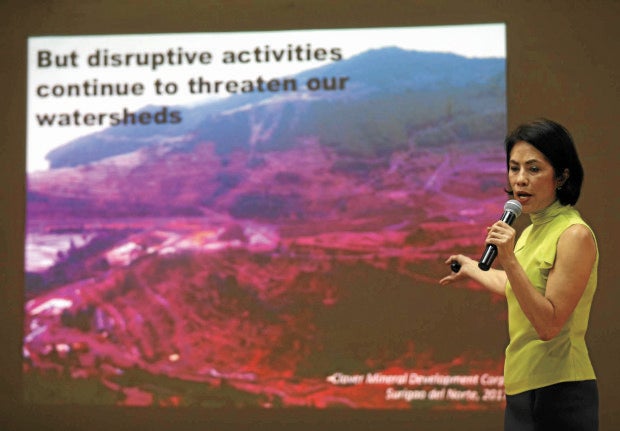 DENR Sec. Gina Lopez with a copy of the DENR Mine Audit Report during a press briefing on Mineral Production Sharing Agreement and an overview on mining sites located in different watersheds in the Philippines. Image in the background is site of Claver Mineral Development Corp. operations in Surigao del Norte taken this year.
INQUIRER PHOTO/LYN RILLON

SURIGAO CITY—Manobo Datu Ben Tindogan is worried about what will happen to his people after they lose the royalty share from mining companies operating in their ancestral lands.

“What will happen to our children if they lose their scholarships? What do we do if we lose our livelihood?” Tindogan asked after Environment Secretary Gina Lopez ordered the closure of 23 mines on Feb. 2 for damaging watersheds.

Fourteen of the mining companies facing closure are located in the Caraga region.

On Tuesday, she canceled 75 contracts for undeveloped mines.

Tindogan’s family is among the 155 indigenous families that will be adversely affected by the closures.

The families get livelihood assistance and 160 of their children get full scholarships from the mining companies.

But with the closures, they will lose all of those benefits and, worse, the royalty share—equivalent to 1 percent of the gross sales of the mining companies—for operating in their ancestral lands.

In January alone, royalty payments in Caraga amounted to over P270 million, paid by 10 mining companies whose operations are within the indigenous peoples’ lands.

The Caraga mining sector—currently the Philippines’ biggest, with 24 large-scale gold and nickel mines—directly employs 16,090 regular workers, according to the regional office of the Mines and Geosciences Bureau (MGB).

The closure of the 14 mines in the region will push all of those workers out of their jobs, affecting their families, and displace the workers at mine suppliers, subcontractors and local businesses that cater to the mining companies.

Taking into account the indigenous communities that would lose their royalty share, MGB-Caraga Director Roger de Dios and Dulma Raagas, president of the Chamber of Mines-Caraga Region Inc., said the total number of people to be affected by the closures would reach more than 300,000.

“We’re not talking yet of lost taxes for local governments that derive the bulk of their revenue from mining operations,” Raagas said.

On top of the business and real property tax and regulatory fees that go directly to local coffers, local governments hosting mining companies enjoy a 40-percent share in the 2-percent excise tax paid by the miners on their annual gross revenue, Raagas said.

Records at the MGB regional office showed that from 2013 to 2015, revenue from excise tax in the Surigao and Agusan provinces alone amounted to P2.1 billion.

The Department of Environment and Natural Resources (DENR) believes ecotourism can make up for the lost mining revenue.

In the news conference on Tuesday where Lopez announced the cancellation of 75 mining contracts, Environment Undersecretary for Field Operations Philip Camara presented the DENR’s plans for a “green economy” in areas where mines would be shut.

“The most immediate thing that can be done is to start to revegetate the mined-off areas, which is in the mining law,” Camara said.

He said every 200 hectares of revegetated areas would generate up to 1,000 livelihoods earning up to P7,000 a month, “which matches the average salary of a mine worker.”

The DENR plans are oriented toward ecotourism, which Camara said could generate “high-quality jobs” and “multiply” into agriculture and biodiversity that could be tapped for “health and wellness products.”

“We can clean up silt and protect the corals, [build] marine sanctuaries for better fish catch,” Camara said.

For forested areas, “we see potential in the sustainable harvest of timber, coal, resins,” he added.

The DENR also hopes to generate community enterprises for biochar and charcoal briquettes, he said.

One of the mining contracts ordered canceled by Lopez was for the Canadian Altai Philippines Mining Corp. in San Fernando town on Sibuyan Island, Romblon province, where an opponent of mining was shot dead in 2007.

For the Bayay Sibuyanon group opposed to mining, the cancellation of Altai Philippines’ contract means justice for the death of Armin Marin.

“Justice will finally be attained after 10 years since  the death of our colleague, Armin Marin,” Bayay Sibuyanon head Rodne Galicha said on Wednesday.

In Batangas province, church and environmental groups also lauded the cancellation of the contract of the Canadian-Australian venture Egerton Gold Philippines Inc.

The company ended its exploration in 2012 and was seeking permit to extract gold in the 20,000-ha site in Lobo town. —WITH REPORTS FROM JAYMEE T. GAMIL AND MARICAR CINCO