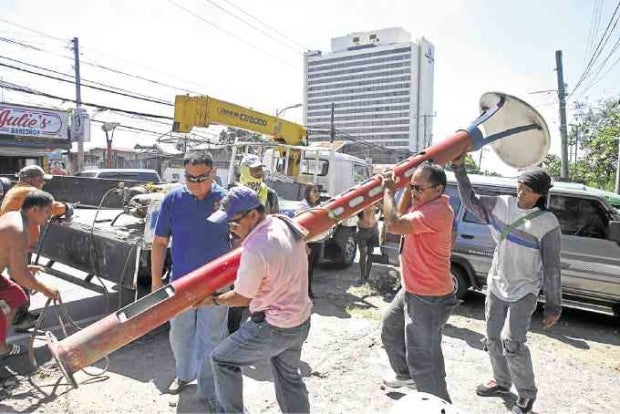 A team of workers in Cebu City dismantle one of the overpriced lampposts put up for the Asean Summit in 2007. —JUNJIE MENDOZA/CEBU DAILY NEWS

The Commission on Audit(COA) has ordered officials of the Department of Public Works and Highways’ regional office in Central Visayas (DPWH-7) to return P43.95 million paid to the contractor of street lights in the cities of Cebu and Mandaue.

In a two-page decision, the COA affirmed the disallowance of the partial payment already made to GAMPIK Construction and Development Inc., ruling the street lighting project illegal for not going through public bidding.

It also directed the COA Prosecution and Litigation Office to refer the case to the Office of the Ombudsman for possible charges “against the persons responsible for the procurement in violation of existing laws, rules and regulations.”

The DPWH-7 skipped public bidding and entered into the contracts in September 2006 in preparation for the Association of Southeast Asian Nations (Asean) Summit in January 2007. The total cost of the contracts was P54.94 million.

Although DPWH officials cited the lack of time in their decision to forego public bidding, the COA said it still did not justify their action to resort to negotiated procurement. This mode, it said, was allowed only in times of emergencies where imminent danger was present.

“The hosting of the Asean Summit is not a disaster. Since there is no calamity at the time the projects were implemented, there is no danger to speak of,” the decision read.

The COA also cited noncompliance with the requirement to post the notice of negotiated contracts on the Government Electronic Procurement System website.

Graft cases are pending in the Sandiganbayan against nine DPWH officials, two private contractors and local government officials for the procurement of 1,800 China-made lampposts that are believed to be overpriced.

The Office of the Ombudsman in the Visayas (Ombudsman-Visayas) earlier said a comparison of the costs of the 1,800 lampposts, as indicated in the Programs of Work and Estimates  prepared by Mandaue City and reflected in the importation documents, showed the equipment was overpriced by nearly 10 times its actual cost.

The Sandiganbayan dropped the lone case against Radaza three years ago. Ouano was named in two cases but one of these was dismissed. Ouano passed away in February last year.

All respondents in the lamppost cases were earlier found guilty of grave misconduct by the Ombudsman-Visayas and were ordered dismissed from public service.

Ouano and Radaza, however, escaped the penalty because they were reelected. Under the Aguinaldo Doctrine, reelection condones administrative liability for misconduct done during a previous term. However, criminal liability cannot be erased.

Ador Canlas, DPWH regional director, said he did not know how the payment would be made. “I don’t know yet whether it will be DPWH-7 or the individual respondents who will pay. Whatever the decision says, that should be respected,” he said.