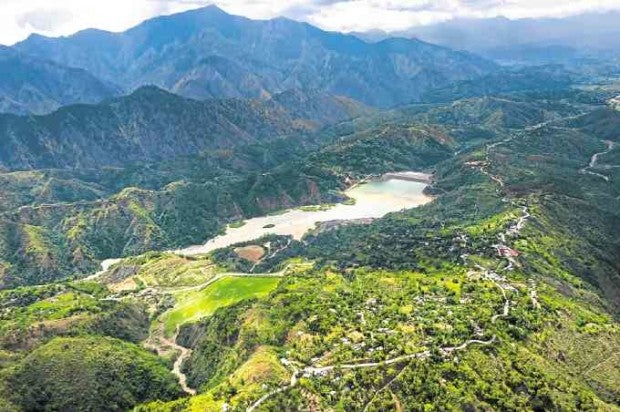 Lopez on Tuesday ordered the cancellation of 75 mining contracts, stepping up her campaign to stop extraction of resources in sensitive areas after earlier shutting more than half of the Philippines’ operating mines.

The contracts—known as mineral production sharing agreements, or MPSAs—are all in watershed zones, with many in the exploration stage.

They cover projects not yet in production and the latest action by Lopez suggests she will not allow them to be developed further.

“In this country, all open-pit mining operations are being done in a watershed,” she said. “This should never be allowed.”

The Chamber of Mines of the Philippines (COMP) said in a statement that with Lopez’s unilateral action, the controversy was “no longer a question of whether a handful of companies really violated environmental laws” but “whether we still uphold the sanctity of contracts.”

Suggesting the affected miners were preparing to take legal action, COMP said the matter had “now become a question of due process” and “fairness and justice that applies to all.”

COMP lawyer Ronald Recidoro  said Lopez’s latest action was “absurd” and ignored due process given MPSAs were contracts between the government and the mining companies.

“You cannot just unilaterally cancel contracts, especially if there are no specific grounds,” Recidoro said.

Mining law allowed operations in watersheds, except those declared protected by the government, he added.

The American Chamber of Commerce of the Philippines called the cancellation of the mining contracts “irresponsible.”

“We do not understand why these permits—which are only to explore but not to produce—are harming watersheds. Responsible government agencies reviewed the permits, and there are dispute resolution provisions that should be followed,” John D. Forbes, senior adviser to the chamber, said in a text message to the Inquirer.

“Cancellation without due process is as irresponsible as operating a mine without following environmental rules and laws,” he said.

The Philippine Chamber of Commerce and Industry agreed. “There should be due process for the mining firms,” its president, George T. Barcelon, said in a phone interview.

But Lopez said it was within her discretion “to decide on the resources of the country.”

The canceled contracts include the $2-billion Kingking gold and copper project in Davao del Norte province, the holder of which is the group of former Sen. Manuel Villar, an ally of President Duterte.

Five of the scrapped contracts involve the Philex group led by Manny V. Pangilinan, who figured in a verbal tussle with Lopez when she spoke against mining during an industry forum in 2012.

A longtime environmentalist, Lopez ordered the closure of 23 of the Philippines’ 41 mines on Feb. 2 for allegedly damaging watersheds and for siltation of coastal waters and farmlands.

Another five mines were suspended, causing an outcry from the industry.

Protesting Lopez’s action, COMP on Monday filed its opposition to her nomination in the Commission on Appointments.

The industry plans to appeal Lopez’s orders to President Duterte, although some miners facing a shutdown of their operations have threatened legal action, with some miners saying on Tuesday they had received a formal closure order from the DENR.

Top Philippine nickel ore producer Nickel Asia Corp. said it would “pursue all legal remedies to overturn [the] order because of due process violations and the absence of any basis” that would warrant a suspension or closure of operations of its unit Hinatuan Mining Corp.

Hinatuan was told that its operation had “impaired the functions of the watershed in the area,” according to a copy of the closure order.

Lopez said on Tuesday that courts could not halt her orders.

“There is no TRO (temporary restraining order) that holds function in the case of environment enforcement,” she said.

The contracts she ordered canceled on Tuesday include the $5.9-billion Tampakan copper-gold project in South Cotabato province, the biggest stalled mining venture in the Philippines.

“We’re canceling this as a gift of love to the people of Cotabato,” Lopez said.

The mining companies that would receive cancellation orders would have seven days to comment and “show why we shouldn’t cancel their MPSAs,” she said.

The fifth MPSA was assigned to Silangan Mindanao Mining Co. Inc. in Surigao del Norte, where Philex hopes to develop a $2-billion copper-gold project that would replace the group’s biggest revenue source—Philex Mining Corp.’s Padcal mine in Benguet province, whose production life is expected to expire in 2022.

The decision to close or suspend existing mine operations followed a months-long audit of the mines, although a government team that reviewed the audit recommended only suspensions and fines.  —WITH REPORTS FROM JAYMEE T. GAMIL, BEN O. DE VERA, ROY STEPHEN C. CANIVEL AND THE WIRES