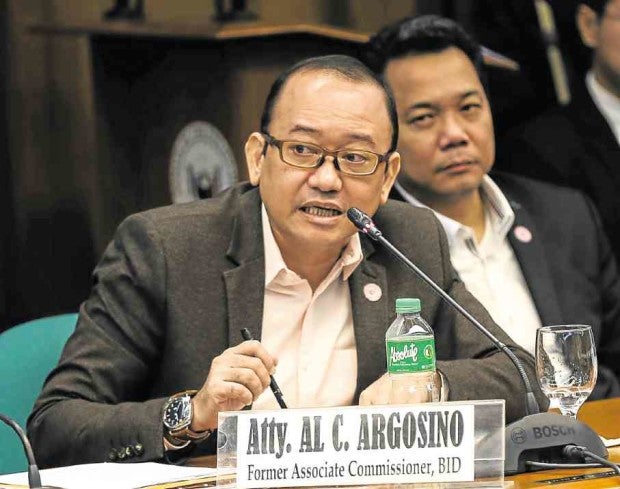 Sen. Leila de Lima on Thursday said she suspected that part of the alleged bribe money given to immigration officials by casino operator Jack Lam on Nov. 27, 2016, in exchange for the release of more than 1,000 Chinese workers arrested for illegally working for him was used but returned.

This after De Lima pointed out some of the money that was taken supposedly from the Lam casino—and supposedly untouched—suddenly seemed to have been withdrawn from a bank when it was surrendered by the two immigration officials on Dec. 13, 2016.

The senator raised these points during the third hearing of the Senate blue ribbon committee investigating the alleged bribery of Argosino and Robles by Lam middleman Wally Sombero last year.

De Lima told reporters after the hearing: “This is not a conclusive assessment yet, but if Argosino cannot explain and Sombero says the money came from the casino … then it means the money has been used and who used it, we do not know.”

“This is just suspicion until proven otherwise,” De Lima said. She underscored the importance for Sombero, who skipped the Senate inquiry for the third time on Thursday, to face the blue ribbon committee.

De Lima, in a slide presentation, showed pictures of the Dec. 13, 2016, press conference of Argosino and Robles in which they presented the P29,999,000 bribe money they allegedly got from Lam through Sombero.

The two officials claimed that they accepted P48 million from Sombero and that Sombero took P2 million for himself, as a case buildup against Lam.

The two also claimed they gave P18 million to former immigration intelligence chief Charlie Calima who was allegedly extorting money from them.

Both Calima and Sombero, on the other hand, have said Argosino and Robles extorted the money in exchange for the release of Chinese employees arrested working illegally in Lam’s hotel and casino in Clark, Pampanga.

At the hearing, De Lima said the pictures showed that some of the money were in bundles.

Sen. Richard Gordon, the committee chair, agreed, noting that some of the money was bundled and tied with rubber bands while some, wrapped with BDO markings.

P18 million that Calima surrendered to the Philippine National Police on Dec. 20, 2016, because it was “clean.”

Before she presented the pictures, De Lima was able to elicit from Argosino that the P30 million cash that was in his possession was “untouched” since Robles turned over the other half of the money last Nov. 27.

“How in heaven’s name that the money came from BDO when it was turned over to you both—there is no bank on (weekends)—you said it came from City of Dreams and (Sombero) said he just borrowed it because you were allegedly demanding it?” De Lima said.

Argosino said he could not answer De Lima because Sombero had just given it to them in bags.

De Lima then told Argosino that senators were puzzled why he and Robles chose to “consolidate” the money in the parking lot of the residence of Pagcor president Fred Lim in Dasmariñas City, Cavite province.

Robles told De Lima that he “turned over” the P20 million as evidence to Argosino at the parking lot of Lim’s residence. Lim, who like Aguirre, Argosino and Robles came from the same fraternity, was then celebrating his birthday. Aguirre was also there at his birthday party.

“You had to travel to Dasmariñas. You can very well do it in your house, in (Robles’) house or in the office or whatever. But why go to a party where your brods were there. Secretary Aguirre was there and Fred Lim,” De Lima told Argosino, as she asked him whether he gave the P20 million to anyone at the party.

Argosino replied in the negative.

Read Next
BI official blamed for departure of Lam middleman
EDITORS' PICK
Nestlé Philippines’ ‘NESCAFÉ Plan’ bags Grand Anvil at PRSP 56th Anvil Awards
Smart reinforces superiority with best speed and mobile video experience in PH
Every Filipino home can now be a smart home with realme TechLife
New 3,045 COVID-19 cases push PH total active cases to 40,074
LTO’s P500-M deal for screws draws scrutiny
How to lose a PH genius: Wesley So officially a US citizen
MOST READ
How to lose a Filipino genius: Wesley So officially a US citizen
US lays out list of aid to ‘satisfy’ Duterte following VFA payment demand
Robredo on Sara Duterte leading poll surveys: Why are Filipinos drawn to leadership of this kind?
Rights lawyer survives attack by playing dead, loses all case files
Don't miss out on the latest news and information.