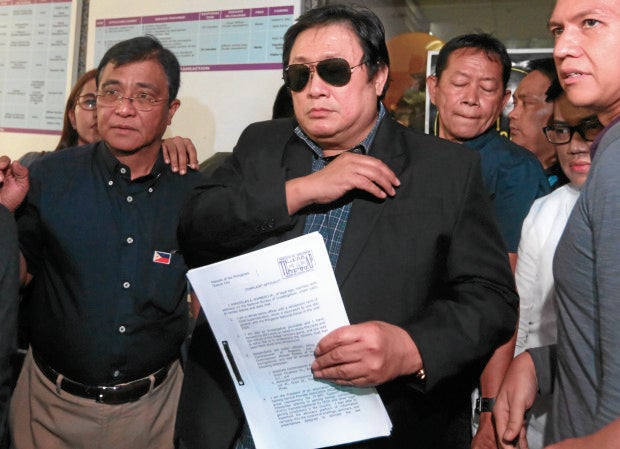 Sen. Richard Gordon on Thursday ordered the Bureau of Immigration (BI) to bring to the Senate the official responsible for allowing the departure of former police officer Wally Sombero, middleman for Chinese gambling magnate Jack Lam, saying the official should be fired for letting a key witness in a bribery scandal leave the country despite being on the bureau’s lookout list.

A frustrated Gordon said Melba Lopez, the BI supervisor who cleared Sombero for departure on Jan. 17, might have been compromised when she supposedly failed to identify Sombero, who was on the immigration lookout bulletin order (Ilbo) earlier issued by the Department of Justice.

The Senate blue ribbon committee has so far failed to get Sombero to testify on his claims that he had served as Lam’s emissary in giving P50 million in bribe money to former Immigration Deputy Commissioners Al Argosino and Michael Robles.

Sombero remains in Canada, purportedly for medical reasons. Gordon threatened to send him straight to jail once he returns to the Philippines for ignoring the Senate’s summons.

“These lapses are unmitigated diarrhea. What do you mean lapse when the name was Sombero?” Gordon said, asserting that the immigration supervisor should have checked properly even while Sombero’s passport name was “Wenceslao.”  His first name indicated on the watch list was “Wally.”

“On that basis, she let him leave? She should be fired! She did not do her job,” Gordon said as he questioned Marc Red Mariñas, BI Port Operations Division chief.

Mariñas had narrated that, upon initial check, the immigration officer on desk, Jean Grace Subia, referred Sombero’s case to Lopez as she “had doubts about the person in front of her.”

“When they verified the name in the passport in the system, the name of Mr. Sombrero did not hit in database because details in Ilbo was only ‘Wally Sombero’ …. The supervisor decided to allow subject to leave country,” Mariñas said, adding that Lopez has been with the bureau for 20 years.

He said he was informed of Sombero’s departure two hours after his plane had left Manila.

Gordon suspected that Lopez had colluded with Sombero, saying: “Someone got to your people.”

“She’s (Lopez) doing absolute damage to our country,”  Gordon said, noting how Sombero’s absence at the hearing has delayed the proceedings.

“You are directed, Mr. Morente, to bring her here,” Gordon told Immigration Commisioner Jaime Morente. The fourth hearing is scheduled on Feb. 16.

Gordon expressed disappointment at the BI for letting Sombero leave even while he had informed the agency of his planned departure a day earlier, on Jan. 16, citing his concern for his family’s safety.

“He was able to leave nonetheless … So much negligence … You were all aware he was leaving,” Gordon said, asking the BI to give the committee a detailed explanation.

He also blasted the BI for its “very capricious, very loose enforcement” of immigration rules, citing the entry of more than 1,300 illegal Chinese workers in the country who had either questionable visas or lacked travel documents.

Read Next
3 OF 5 Duterte remarks ‘foolishness’
EDITORS' PICK
Nestlé Philippines’ ‘NESCAFÉ Plan’ bags Grand Anvil at PRSP 56th Anvil Awards
Smart reinforces superiority with best speed and mobile video experience in PH
Every Filipino home can now be a smart home with realme TechLife
New 3,045 COVID-19 cases push PH total active cases to 40,074
LTO’s P500-M deal for screws draws scrutiny
How to lose a PH genius: Wesley So officially a US citizen
MOST READ
How to lose a Filipino genius: Wesley So officially a US citizen
US lays out list of aid to ‘satisfy’ Duterte following VFA payment demand
Robredo on Sara Duterte leading poll surveys: Why are Filipinos drawn to leadership of this kind?
Rights lawyer survives attack by playing dead, loses all case files
Don't miss out on the latest news and information.