Jasig termination a ‘major setback’ but all’s not lost – Zarate 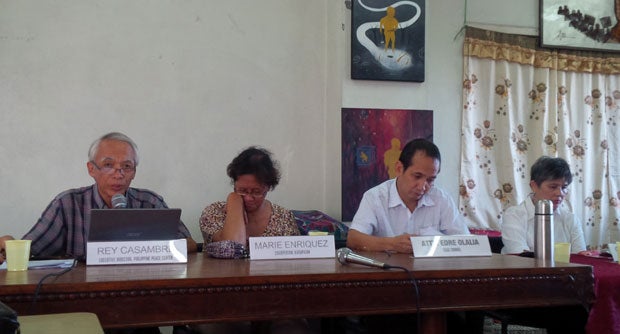 Rey Casambre (left), executive director of the Philippine Press Center (PPC), together with other officers of PPC, talks to the media about Jasig and the Tiamzon couple. Photo by KRISTINE ANGELI SABILLO

A militant lawmaker on Tuesday said the termination of a joint agreement to ensure safety and immunity to communist negotiators is deplorable but all is not lost.

In a statement, Bayan Muna Rep. Carlos Zarate said the termination of the Joint Agreement on Safety and Immunity Guarantees (JASIG) is a “major setback and very unfortunate” amid calls for the resumption of the peace talks.

Zarate said he remains hopeful that positive developments on resuming the peace talks would come about during the 30-day notice for the termination of JASIG to take effect.

“Considering that the JASIG termination still will take effect only after the lapse of 30 days from its formal receipt by the National Democratic Front (NDF), we hope that positive developments will still emerge and prevail in the coming days that will restore the degree of trust that made possible the formal resumption of talks in August last year,” Zarate said.

Zarate said this is not the time to abandon the advances achieved in the peace talks between the government and the National Democratic Front (NDF).

“Despite these developments, we will continue our earnest call for the parties to give another chance our quest for a just and lasting peace. This is not the time to abandon it, for the greater interest of our country and people!” Zarate said.

For his part, Muntinlupa Rep. Ruffy Biazon said the termination of the JASIG “brings us closer to the outbreak of a full blown armed conflict” with the communist insurgents.

“In this regard, it is incumbent upon the State’s security forces to elevate its state of readiness for the potential armed conflict that might erupt not just in the countryside but even possibly in urban centers,” said Biazon, a former customs chief and the son of the former Armed Forces of the Philippines chief Rodolfo Biazon.

Biazon added that the falling out between President Rodrigo Duterte and the NDF “may lead to an eventual rethinking of the political alliance between the president and groups aligned with the Left.”

“It may be sufficient grounds for either side to decide to part ways,” Biazon said.

“Following the President’s announcement of the cancellation of the peace talks with the CPP/NPA/NDF and per instructions, the Government is hereby serving this notice of the termination of the Joint Agreement on Safety and Immunity Guarantees (JASIG),” Dureza said in his letter.

The government and the NDF signed in February 1995 the JASIG, which guarantees safety and immunity to negotiators, consultants, and other personnel joining the peace talks.

Dureza assured that the Philippine government remains committed in pursuing peace, and in protecting the country from threats of insurgency and terrorism.

“Let us be one in our call for a stop to armed violence and pursue just and lasting peace by ways of peace,” Dureza said.

The government terminated the JASIG following the declaration of an all-out war against the New People’s Army and suspending the peace talks with the communists.

Duterte even called the communist negotiators “spoiled brats” and tagged the NPA as a “terrorist group.”

Duterte suspended the peace talks after a unilateral ceasefire bogged down, with the NPA lifting the ceasefire first allegedly due to the government’s failure to release political prisoners.

The peace talks were suspended ahead of the fourth round of peace negotiations in the Netherlands scheduled this month, when both parties are expected to discuss the bilateral ceasefire agreement.

Duterte: No more peace talks with Reds without ‘compelling reason’