Duterte: No more peace talks with Reds without ‘compelling reason’ 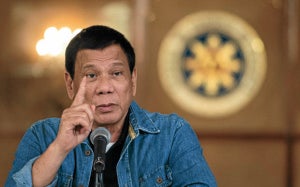 Peace talks with communist rebels will no longer continue, unless there’s a compelling reason to do so, President Rodrigo Duterte told reporters on Sunday during his visit to his parents’ graves in Davao City.

“Peace talks will remain canceled unless there is a compelling reason that will benefit the interest of the nation,” Mr. Duterte said, a day after he lifted the government’s unilateral ceasefire with the New People’s Army (NPA), the armed wing of the Communist Party of the Philippines (CPP).

“If I feel that there is a joke somewhere. I will not waste my time,” he said.

He said he would also direct government negotiators, who had been engaged in talks with communists in Rome, to come home.

“I will request maybe tomorrow the Philippine contingent to fold their tents and come home,” he said. “I am not ready to resume peace talks. As I have said, I would like to tell the Filipino people: Peace with the communists might not come in this generation.”

On several occasions, the President had insisted that he would not give in to the demand of the communist rebels to free all political prisoners.

“I will not compromise integrity of government by releasing all political prisoners,” he said.

“I would not honor any agreement that would violate the Constitution. I never promised to release all political prisoners. You don’t release them because they committed a crime,” he added.

‘My soldiers have died’

He said he lifted the ceasefire ahead of the Feb. 10 scheduled lifting of the ceasefire on the part of the rebels because many soldiers had died.

The government peace panel and the National Democratic Front of the Philippines (NDFP) negotiators were supposed to meet for the fourth rounds of talks in The Netherlands from Feb. 22 to 25.

‘Prepare for a long war’

“If you want to extend it for another 50 years, so be it. I’d be happy to accommodate you,” he said.

He stressed that he had “walked the extra mile” for peace.

Mr. Duterte said he was “not ready to talk about anything.”

“I told soldiers to prepare for a long war. I said it will not come during our generation. I know them already,” he said.

Earlier Saturday, the government peace panel said the talks were scheduled to continue despite the lifting of the unilateral ceasefire.

The government lifted its ceasefire on Friday night, two days after the NPA said it was canceling its own truce by Feb. 10.

The NPA had accused the government of reneging on a promise to free more jailed comrades and of advancing its troops into rebel-held territories.

Presidential peace adviser Jesus Dureza and government chief negotiator Silvestre Bello III had both stressed that President Duterte only ended the ceasefire, but not the whole peace process.

Bello said that both sides were due to meet in the Netherlands later this month as well as in Norway in April.  The government panel had submitted to the NDFP a proposal for a bilateral ceasefire.

On Friday, the military said that at least six soldiers were killed in fresh hostilities this week, including three who were kidnapped and found dead, their bodies bearing multiple gunshot wounds.

In lifting the government ceasefire, Mr. Duterte said the rebels had insisted on impossible demands, including the release of about 400 jailed political prisoners.

He lamented that his administration would have been the “golden opportunity” to end about 50 years of fighting that, according to estimates, has left at least 40,000 dead.

“I am asking the soldiers, go back to your camps, clean your rifles and be ready to fight,” Mr. Duterte had said.

“Sorry. So I really would like to express my sadness. We cannot have a peaceful generation,” he added.

Before the President’s announcement, Dureza was still hopeful that talks would continue.

“On the peace talks, he has not mentioned anything specific about it so we consider it, as far as peace adviser, we assume that the peace talks will  still continue as scheduled, unless otherwise ordered by the President,”  Dureza had said.

The NDFP, the political wing of the communist movement, said that despite the end of the truce, both sides could carry on with their work.

“The NDFP remains hopeful that the peace talks will proceed on track and that the comprehensive agreements on socioeconomic, political and constitutional reforms currently being negotiated will be deemed ready for approval by both panels by end-2017, and soon after by the principals,” NDFP chief negotiator Fidel Agcaoili had said.

But the military appears to be preparing for war against NPA.

Maj. Gen. Rafael Valencia, commander of the Eastern Mindanao Command—the area where skirmishes and abduction of soldiers had recently taken place—said the military could now pursue  the NPA. He said he would wait for an official word before deployments to rebel-held areas would be made.

“There will be no additional troops. I believe our force on the ground [is] sufficient,” he told reporters.