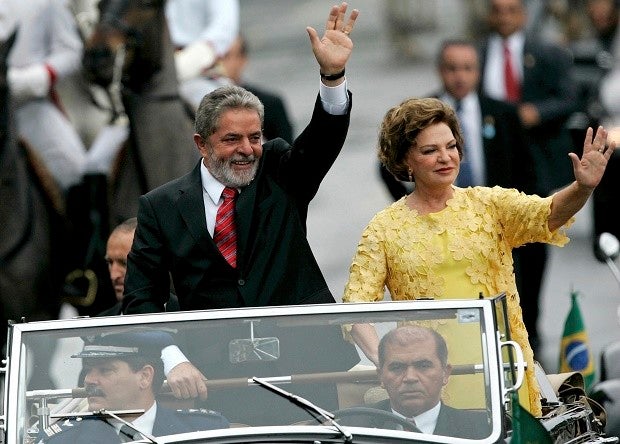 In this Jan.1, 2007 file photo, Brazilian first lady Marisa Leticia Lula da Silva, right, waves alongside her husband Brazil’s President Luiz Inacio Lula da Silva on their way to Congress for his swearing-in ceremony for his second term in Brasilia, Brazil. The former first lady, a constant and strong presence at the side of her husband during his rise to the presidency and his recent fall, has died on Feb. 3, 2017, hospital authorities said. AP FILE PHOTO

SAO PAULO — Former Brazilian first lady Marisa Leticia Lula da Silva, a constant and strong presence at the side of husband Luiz Inacio Lula da Silva during his rise to the presidency and his recent fall, died on Friday. She was 66.

She had been hospitalized in Sao Paulo since Jan. 24 after suffering a stroke. A hospital statement said she died at 6:57 p.m. local time, shortly after the former president and doctors said she no longer had any brain function.

On his Facebook page, the former president confirmed his wife’s death and called her “Brazil’s eternal first lady.” Several pictures showed them together in Brazil and during trips to other countries. The former president said a wake would be held for her Saturday at the Metalworkers’ Union of Sao Paulo’s industrial suburb of Sao Bernardo do Campo where the two first met.

Both members of the still highly popular couple became entangled in corruption investigations that have roiled Brazil the last few years.

In September, Marisa Leticia Lula da Silva was charged with corruption in one case along with her husband. The couple and several others were accused of benefiting from renovations at a beachfront apartment in the coastal city of Guaruja in Sao Paulo state. The couple denied doing anything wrong.

The improvements were made by the construction company OAS, which is one of the corporations involved in the huge kickback scheme at Brazilian state oil company Petrobras that has led to charges against dozens of politicians and business executives.

Silva himself is facing corruption charges in five separate cases related to the “Car Wash” investigation into the graft at Petrobras, which prosecutors says involved billions of dollars in bribes being paid to get lucrative contracts. Silva, who has expressed interest in running for president in 2018, denies wrongdoing and contends he is being persecuted by political enemies. Opinion polls have made him a front-runner for that race.

His wife’s hospitalization proved to be a unifying force at a time of high polarization in Latin America’s largest nation.

Born Marisa Leticia Rocco Casa De Maraquinha, Silva’s wife grew up in Sao Bernardo do Campo, outside Brazil’s industrial center of Sao Paulo. She worked packaging chocolates at a factory from her early teens until getting pregnant at 21. When her first husband died, she went to work as a school inspector.

In 1973, she met Silva, who had lost his first wife during childbirth. The two were married the next year and went on to have four children.

At the time, Silva’s career as a union leader was just taking off. In 1975, he was elected head of the Metallurgists Trade Union.

In 1980, the Workers’ Party was founded, and his wife sewed its first flag. While Silva was gaining notice as an organizer, she was developing as an activist, helping to organize large protests of women to demand workers’ rights.

When Silva unsuccessfully ran for president in 1982, 1986, 1994 and 1998, she was frequently at his side during the campaigns. He finally won in 2002, putting a cap on a most improbable journey for both him and his wife in a nation that has historically struggled with severe inequality.

Over the next eight years, as Brazil’s economy boomed and millions of people were pulled from poverty, Silva was wildly popular. The first lady wife was often a fixture, both on the campaign trail and during trips abroad.