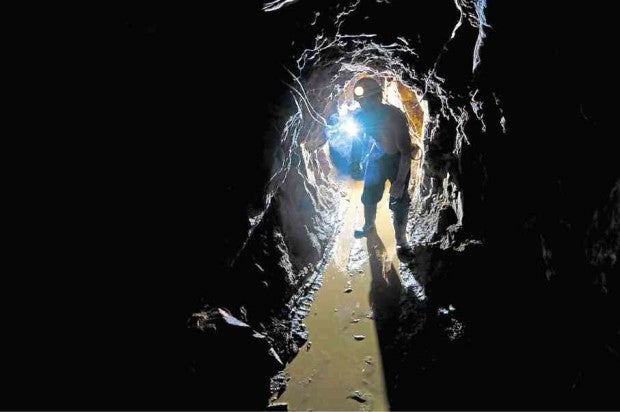 TUNNEL TRAP This miner in Benguet province and his family are among the hundreds of thousands of people who would suffer from the closure of 23 mines in the country. —INQUIRER FILE PHOTO

The Philippine mining industry challenged on Friday the planned closure of 23 mines, mostly nickle producers, and the suspension of at least five others, saying it would affect an estimated 1.3 million people.

Artemio Disini, chair of the Chamber of Mines of the Philippines, said miners to be affected by the order could appeal to President Duterte “before going to the courts.”

He said the closure and suspension placed 67,000 jobs at risk, with about P66.6 billion worth of annual production expected to be lost. The financial impact was also likely to be huge, with the government seen to lose P16.7 billion in taxes.

Disini said the environment department had not sent the chamber copies of the complete audit report despite repeated requests.

“We have done this repeatedly—verbally and in writing—but we get no response,” Disini said, adding that Environment Secretary Gina Lopez had told them the report “is too complicated.”

Lopez in July last year ordered an immediate review of the operations of all 41 metallic mines in the country. Three months later, she announced that only 11 mining companies “passed” the audit and 30 firms were either ordered suspended or recommended for suspension for failing to meet environmental safety standards.

But on Thursday she said that of the total, 23 mines had been told to close after illegally encroaching on watersheds, leaking waste into rivers and destroying trees. A further five mines have been ordered to suspend their operations, while the decision on another mine has been deferred.

Most of the mines targeted for closure produce nickel, and account for half of the Philippines’ exports of the raw material used to make steel.

“There should be freedom of information here,” protested Enrique C. Fernandez, president of Eramen Minerals Inc., operator of a nickel mine in Zambales province. “We have never received any report. All we got was a set of questions that we should answer.”

Eramen’s mine has been idle for the past two and a half years, having been placed under suspension during the Aquino administration, which was maintained by Lopez.

The chamber was reaching out to the interagency Mining Industry Coordinating Council, chaired by Finance Secretary Carlos Dominguez III, before the group would consider going to court, Disini said.

Also, the operation of mines owned by members Oceanagold Philippines Inc. and Lepanto Consolidated Mining Corp. are facing suspension.  A verdict on another member, Filminera Resources Corp., was “deferred” by the environment department.

Disini noted that none of the affected members received any communication from the department about the latest audit results.

Appeal to the President

But Lopez said notices were sent out to concerned companies earlier this week.

“They (mining companies) can make an appeal to the President,” Lopez said. “Finality of the order would depend on the President.”

Disini said the results of the probe should have been communicated to the firms concerned rather than announced through the press.

It also came in trickles, with Lopez initially just listing 14 mines ordered closed and six others suspended. She added a 15th mine for shutdown as the briefing was ending. A further list of 21 mines for closure was later handed out to reporters.

It was only in the evening that the department submitted a final list that named 23 mines for closure and only five for suspension.

The list also misspelled company names and was inconsistent with Lopez’s presentation slides.

The Philippines is the world’s top supplier of nickel ore and the main exporter to China, and the move is expected to fuel a rally in global prices. In 2015, the Philippines produced about 24 percent of the nickel consumed worldwide, according to Morgan Stanley.

The move risked “sending signals out to the market and to mining investors that they are not welcome here,” said Ronald Recidoro, the chamber’s vice president for legal and policy affairs.

Mining stocks fell on Lopez’s announcement, including Nickel Asia, one of the world’s largest nickel producers, which fell 0.58 percent to P6.81, up slightly from the day’s low of P6.61.

“While the Department of Environment and Natural Resources is on track in policing mining companies found to have wantonly violated the Philippine Mining Act, affected companies, however, can make an appeal and ask for reconsideration from the DENR,” presidential spokesperson Ernesto Abella said.

Josephine Ignacio, coordinator and convener of the Defender of the Environment for Genuine Development of Zambales, said that among those on the list were mines that were located in the Zambales watershed.

“We’ve been protesting the destructive mining activities in our province and we’re glad that our appeal did not fall on deaf ears,” Ignacio said. —WITH REPORTS FROM THE WIRES, LEILA B. SALAVERRIA AND ALLAN MACATUNO

Read Next
Ombudsman: Court must hear env’t case vs ex-solon
EDITORS' PICK
Palace: Duterte unfazed by ICC probe on drug war killings
Palace says ICC prosecutor report is ‘fantastical,’ based on ‘hearsay’
Smart brings KCON:TACT especially 4U to subscribers from June 19 to 27
Defending himself before ICC ‘logical thing to do’ for Duterte, says Drilon
Synology NAS: A photo storage and multimedia server for your home
Kai Sotto, Angelo Kouame lead Gilas final 12 vs South Korea
MOST READ
Opposition ‘must go beyond anti-Duterte platform’ in 2022 polls – Drilon
Duterte to meet with Sotto, Velasco to discuss fate of BARMM polls
Palace says ICC prosecutor report is ‘fantastical,’ based on ‘hearsay’
Sotto sees Sara, Pacquiao as ‘formidable competitors’ for president
Don't miss out on the latest news and information.