Escudero chides Bato for playing to the camera 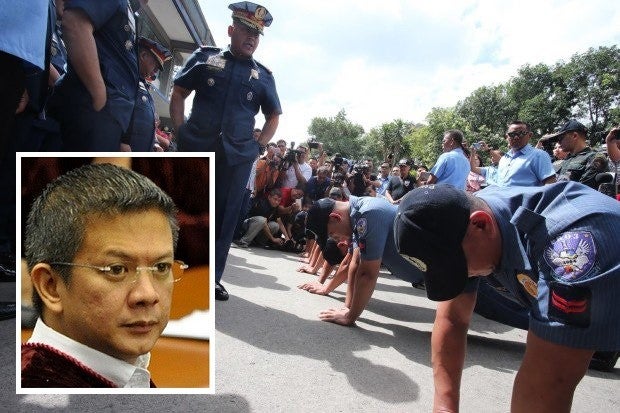 Senator Francis Escudero chided Director General Ronald dela Rosa on Thursday, Feb. 2, 2017, for playing for the cameras when he berated seven policemen and made them do a push up. INQUIRER FILE/PNP PIO

“Maliwanag na pang-camera at pang TV,” Escudero said, referring to Dela Rosa hurling invectives at seven policemen and making them do a stationary pushup in front of members of media on Wednesday.

The seven policemen were allegedly involved in robbery-extortion activities on Koreans in Pampanga in December last year.

READ: Bato slams cops in extortion of Koreans: You joined PNP to be syndicates?

Escudero was asked for his comment during the Kapihan ng Senado on Thursday.

“Uulitin ko, ‘yung ‘I will melt,’ mumurahin, papupush up-in, pang camera at ang TV lamang yun,” the senador said. (Let me repeat: the ‘I will melt,’ the cursing, the pushup, they were all for the cameras and the TV.)

READ:  I want to melt in shame—Bato

“Bakit wala syang pinag-push up o sinigawan o minura sa Crame? E dun mismo pinatay at nandun mismo yata din sya (noong kinidnap at pinatay yung naunang Koreano),” he said. (Why didn’t he order any pushups or curse anyone in [Camp] Crame? It was there where the killing took place and it seems he was there [when the first Korean was abducted and murdered.])

Escudero was apparently referring to South Korean businessman Jee Ick-joo, who was allegedly abducted from his Angeles City home by antidrug policemen before he was murdered inside Camp Crame on Oct. 18.

Dela Rosa was not in Camp Crame when Jee was reportedly strangled to death inside the police headquarters. The police chief was watching a concert.

Senator Panfilo Lacson, chair of the committee on public order and dangerous drugs, has started an investigation on Jee’s abduction and murder. CBB/rga