PCSO, PNP to set up task force against illegal gambling 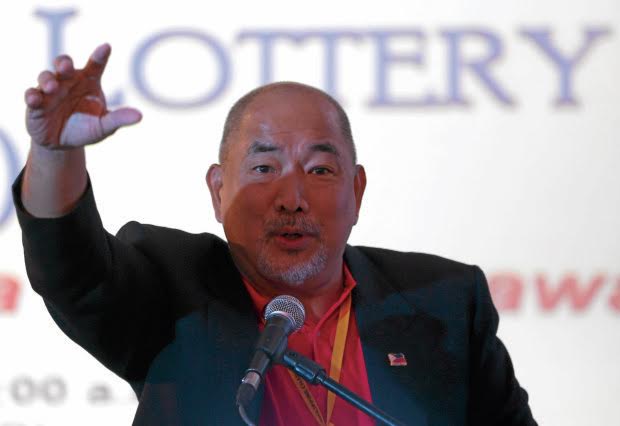 PCSO Chairman Jose Jorge Corpuz delivers his speech during the Launching of the Small Town Lottery (STL) expansion on Jan. 31, 2017, held at the Shangri-La Edsa in Mandaluyong City. (PHOTO BY EDWIN BACASMAS / INQUIRER)

MANILA — The Philippine Charity Sweepstakes Office is now in talks with the Philippine National Police to come up with a comprehensive plan to eliminate illegal gambling in the country.

PCSO Chairman Jose Jorge Corpuz and other agency officials made this announcement during the launch of the expanded small town lottery at the Edsa Shangri-La Hotel in
Mandaluyong City on Tuesday (Jan. 31).

PCSO General Manager Alexander Balutan said the PCSO has been holding workshops and a series of talks with the PNP and the Criminal Investigation and Detection Group to combat illegal gambling. A task force will be created for the campaign against illegal gambling, according to Balutan.

“After our workshop, PCSO will tell which areas have illegal gambling or have problems,” said Deputy Director General Ramon Apolinario, PNP’s deputy director for operations.

So far, there is no verified list yet of active illegal gamblers nationwide and no unit in PNP that currently looks into illegal gambling, according to Apolinario. But, Apolinario said, “If they are not in PCSO’s list (of accredited STL operators), they are illegal.”

“Can you tap the services of the PNP? Can you approach the CIDG in your areas of your operation? If the PNP in your areas will not be functioning, let us know. If they will not act on your complaints, we will not include them in the sharing. I am consistent. We will stop corruption. We will stop illegal gambling.”

PCSO General Manager Balutan said the move to expand STL — the only legal numbers game in the country — has been in response to President Duterte’s marching orders to stamp out illegal gambling.

“We can’t do this alone, but with the help of our partners, the Philippine National Police (PNP), the local government units (LGUs), Armed Forces of the Philippines (AFP), National Bureau of Investigation  (NBI), among others, plus the people’s support of the Small Town Lottery  (STL), and their vigilance,” Balutan said.

Balutan said the expanded STL would add revenues to the government and increase funding for the PCSO’s charity services and charity funds for the local government units and the PNP.

“For the first time, we have a clear picture of how much funds we expect to get from small town lottery, now that it is legal, it is documented, and supervised by the government. The allocation and
utilization of these funds can be traced and properly managed,” he added.

PNP Deputy Director General Apolinario said the PNP has indeed been benefiting from the PCSO through the charity funds and had received donations like ambulance, repair of vehicles and medicines.

Other funds can be used for operations against crimes such as illegal gambling. “The money we receive will be subject to government auditing standards. We will submit our expenditures to audit,” he said.

“To all illegal gambling operators, your minions and protectors, your days are numbered. I’m warning you, you can run but you cannot hide. Go legal or else we will arrest you, and file appropriate charges against you.”

He described how payola ensured protection for jueteng lords, how it filled the pockets of elected officials and government employees, allow gambling lords to continue their illegal activities, and how it can dictate the turnout of elections.

During the press conference, the PCSO announced the authorized agent corporations (AAC) that will operate in 56 different areas. They include the Diamond Gaming & Research Center Corp. in Bulacan, Lucky Pick Amusement and Development Amusement Corp in Ilocos Norte; Suncove Corporation in Pampanga; Lake Tahoe Gaming & Amusement Corp. in Olongapo City and Ramloid Corporation in Laguna.

Applications for STL are also extended until Feb 17 to the 43 areas which do not have STL operations yet, including the western district of the National Capital Region or Metro Manila, Ilocos Sur, Palawan, and Romblon, according to Corpuz.  SFM/rga