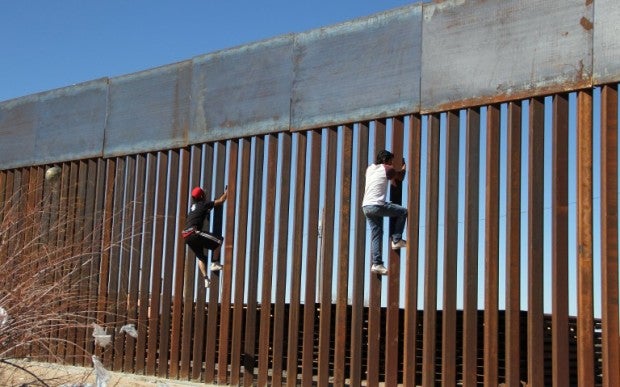 Boys play around, climbing the border division between Mexico and the US in Ciudad Juarez, Mexico on Jan. 26, 2017.
US President Donald Trump on Thursday told Mexico’s president to cancel an upcoming visit to Washington if he is unwilling to foot the bill for a border wall. Escalating a cross border war of words, Trump took to Twitter to publicly upbraid Enrique Pena Nieto. “If Mexico is unwilling to pay for the badly needed wall, then it would be better to cancel the upcoming meeting.” AFP

MEXICO CITY, Mexico — Mexico welcomed on Monday a senior US official’s suggestion that drug cartels could pay for a controversial border wall, but the idea raised eyebrows in local media.

US President Donald Trump has angered Mexico by insisting that he will make the country pay for a massive barrier along the border, though he has yet to specify exactly how.

White House Chief of Staff Reince Priebus said Sunday there was a “buffet of options” to fund the wall along the 2,000-mile (3,200-kilometer) border.

READ: How Trump’s plan to pay for Mexico border wall would work

“There is no final conclusion on exactly how this wall is going to be paid for by the Mexican government,” he told CBS’s “Face the Nation.”

“It can either be through a tax on goods coming across the border. It be through tax reform and a formula on import and export taxes and credits. It could be on drug cartels. And it could be on people that are coming here illegally and paying fines. Or it could be all of the above.”

Republican House Speaker Paul Ryan has estimated the wall’s cost at between $12 and $15 billion.

Mexican Foreign Minister Luis Videgaray, who was in Washington last week for talks with US officials, welcomed the suggestion that cartels pay for the wall.

“It’s undoubtedly positive progress that they are talking about someone that is not Mexico. Narcos are not Mexico,” Videgaray told the Televisa network.

“It’s a signal that — at least that’s how I interpret it — must be welcomed because we are already seeing how the discussion is changing.”

Videgaray said Mexican and US officials could meet in the next few days.

President Enrique Pena Nieto canceled a meeting with Trump scheduled for Tuesday in Washington in protest over his wall plan, but the two leaders later instructed their teams to continue the dialogue.

Priebus did not explain how the authorities would get money from the cartels.

The US Treasury Department has imposed sanctions that block Mexican drug lords’ US assets.

Courts can also seize the funds of convicted kingpins.

US federal prosecutors, for example, are seeking a $14 billion forfeiture from Sinaloa drug cartel baron Joaquin “El Chapo” Guzman, who was extradited to New York on January 19, on the eve of Trump’s inauguration.

The national daily Reforma exclaimed on its front page: “They are analyzing making cartels pay!” and the story described the option as “not very conventional.”

The headline in another newspaper, Excelsior, said: “Now they want narcos to pay for the wall.”

A cartoon in Excelsior featured a drug lord sitting on a bag of money, holding an assault rifle and asking: “What is Trump smoking?” CBB