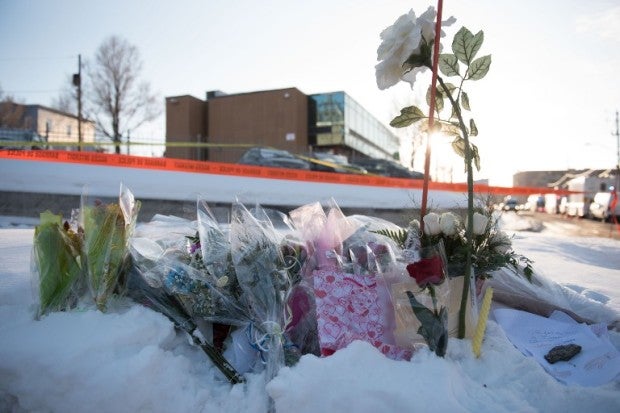 Flowers at a makeshift memorial near the Islamic Cultural Center in Quebec City, Canada on Jan. 30, 2017. Gunmen stormed the Islamic center during evening prayers Jan. 29 and opened fire on dozens of worshipers, killing six and wounding eight in what Canadian Prime Minister Justin Trudeau condemned as a “terrorist attack.”  AFP

QUEBEC CITY, Canada — One of the two suspects held over a mosque shooting in Quebec City that left six people dead called police to surrender, authorities said Monday as they tried to piece together the gunmen’s motive.

Prime Minister Justin Trudeau has condemned as a “terrorist attack” the deadly assault Sunday night on the Islamic Cultural Center, one of the worst attacks ever to have targeted Muslims in a western country.

But it remained unclear what prompted the attack.

The suspects have been identified by local media as French-Canadian Alexandre Bissonnette, and Mohamed Khadir, a Canadian of Moroccan descent.

Police declined to release the suspects’ identities at a nationally-televised news conference on Monday, saying only that both were Canadian nationals with no apparent foreign links.

“It is a domestic investigation at this time,” said Royal Canadian Mounted Police Inspector Martin Plante, while shedding no light on the suspects’ motives.

Six people were killed and eight were wounded in the attack. One of the suspects was arrested at the scene, and the other surrendered without incident after calling police to tell them where he was, police said.

Police said they responded to the initial reports of the shooting at 7:55 pm local time (0055 GMT), arriving within minutes at the mosque where they arrested one of the suspects.

About 15 minutes later, emergency services received a call from a man identifying himself as one of the assailants, and telling police where they could find him.

He was apprehended in his car at 9:00 pm about 20 kilometers (12 miles) outside of Quebec City. He is between 25 and 30 years old, said Denis Turcotte of the Quebec City police.

Monday morning, police searched a residence near the mosque, which is not far from Laval University and the historic heart of the four-centuries-old city.

Denis Briere, rector of the university, condemned the “odious, inhuman terrorist act.” Local media said the two suspects may have been students at the school, but officials would not confirm this.

Read Next
Mexico welcomes US idea to make drug cartels fund wall
EDITORS' PICK
Heads may roll at BOC, says Palace if sugar smugglers are allowed to use recycled import permits
What to watch out for when selecting a video surveillance solution
Apple warns of flaw that lets hackers into iPhones, Macs
House energy committee chair Arroyo bats for cheap electricity
46% of schools nationwide to have full face-to-face classes on Aug. 22
vivo brings to the Philippines a powerful smartphone with a slimmer body, the vivo Y02s for only PHP 6,499
MOST READ
DepEd to give teachers P5K cash allowance within first week of classes
LOOK: Miel Pangilinan dazzles in glittery pre-debut shoot
Man abducted in Batangas gasoline station, found dead in Quezon
Dressing the dead: Indonesian villagers clean corpses in afterlife ritual
Don't miss out on the latest news and information.