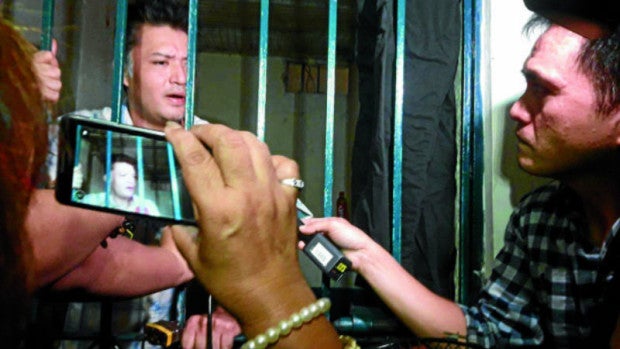 BEHIND BARS Actor Mark Anthony Fernandez says the kilo of marijuana found in his possession by policemen was to be used as medicine to prevent cancer. CONTRIBUTED PHOTO

CITY OF SAN FERNANDO— The checkpoint put up by the Angeles City police, where actor Mark Anthony Fernandez was caught with dried marijuana on Oct. 3, was legitimate, and the inspection of his vehicle was “done in plain view,” said a witness who testified for the prosecution at the actor’s trial on Wednesday.

Fernandez is facing trial for transporting marijuana, a violation of the dangerous drugs law.

PO2 Fernando Ladrillo, the second witness presented by government prosecutors, arrested the actor. He disputed the claim made by Fernandez’s lawyer that the actor was arrested “under doubtful circumstances.”

Fernandez claimed the marijuana was planted by the policemen. But he earlier told reporters that the contraband belonged to him and that it would be used in cancer prevention treatment.

Ladrillo testified that he signaled Fernandez’s yellow Ford Mustang to stop because it did not have a plate number. He went to the driver’s side and asked the actor to show his driver’s license.

Ladrillo said PO2 Jason Dimaculangan stood on the other side of the car and had a clear view of the front passenger seat. Dimaculangan shouted, “May marijuana (There is marijuana),” Ladrillo told the court.

The 800 grams of marijuana were laid open in a pack partly tucked inside a bag. Fernandez then sped off but policemen gave chase and caught up with him due to traffic, Ladrillo said. —TONETTE OREJAS