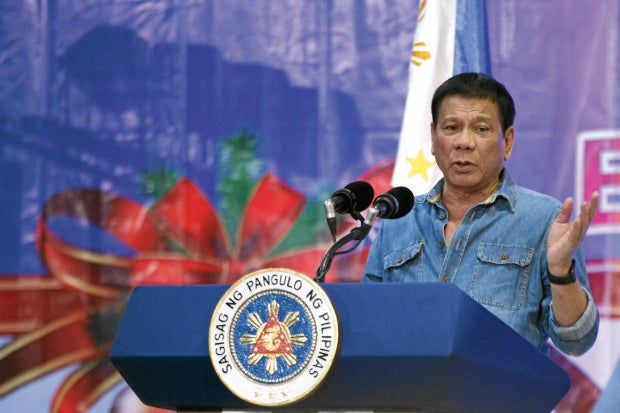 TACLOBAN CITY, Leyte — President Rodrigo Duterte was not happy over the snail-paced transfer of families displaced by Supertyphoon “Yolanda” to permanent shelters in Tacloban City, Leyte.

Pounding on the podium, the President gave concerned agencies until March to make sure that the remaining 8,816 families would be in permanent shelters two months from now.

“January, February, March. March, lipat na kayo dito at makabalik ako. Kung di matapos sa March, maggawa kayo ng limang krus, yung parang kay Kristo. Ipakarga ko sa kanila at ikot-ikot dito (January, February, March. By March, you should have transferred already (to permanent shelters) and I will come back here. If these are not ready, they better make five crosses, like the one used by Christ. I will make them carry these crosses around here),” he said.

He, however, didn’t specify whom he would hold accountable if the deadline was not met by March although he alluded to officials of agencies involved in providing permanent houses for Yolanda survivors.

Mr. Duterte arrived here past 4 p.m. on Wednesday, two hours late of the schedule, to lead in the turnover of 1,100 housing units to families of this city, who lost their houses during the strongest typhoon to hit land in 2013.

The ceremonial rites was held at the New Hope Village in Barangay Santa Elena, about 17 kilometers away from the city proper.

During the ceremony, Secretary Leoncio Evasco, chair of Housing and Urban Development Coordinating Council, updated the public on the resettlement of families who lost their houses due to Yolanda.

His report showed that as of Jan. 23, 5,617 families had been relocated to the resettlement sites in Tacloban, considered the ground zero of Yolanda.

The figures were about 38 percent of the 14,433 families who have not been relocated to the same number of housing units.

The construction of the housing units involved the National Housing Authority in coordination with other government agencies like the Department of Public Works and Highways, Local Water Utilities Administration and its local counterpart, the Leyte Metropolitan Water District, and the National Electrification Administration through its local utility, the Leyte II Electric Cooperative.

Rizalde Mediavillo, regional manager of the NHA, said that they would do their “best effort” to comply with the presidential deadline, the second made by Mr. Duterte.

During the third commemoration of Yolanda’s onslaught last November 8, the President also expressed his dismay over the slow transfer of the affected families to permanent shelters.

He vowed to return to Tacloban in December to see if his orders had been carried through. He, however, failed to fulfill his promise.

The NHA earlier cited bad weather, difficulties of finding relocation sites and site development as among the reasons for the delay of the construction of these houses.  SFM