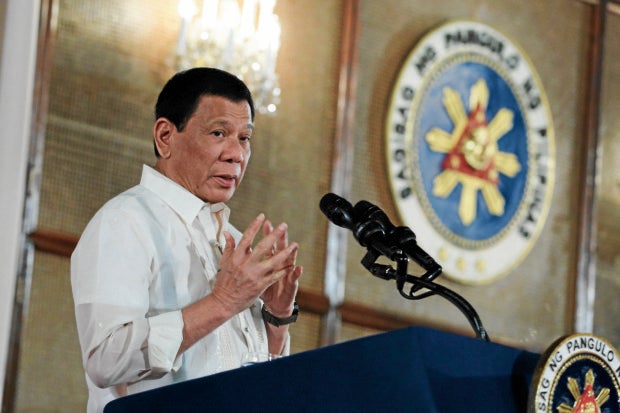 MANILA — President Duterte said on Wednesday members of the media should join anti-drug operations to quell persistent insinuations that policemen were behind the unexplained murders of drug suspects.

As expected, the President devoted much of his time defending his brutal war on drugs when he spoke with survivors of Supertyphoon “Yolanda” in Tacloban City.

“To address these human rights (concerns), I want the police to bring the media in every police operation,” said Mr. Duterte, declaring for the nth time that he never ordered the police to carry out extrajudicial killings.

“Who wants to kill a person? I have to protect the police because I told them to work,” he said.

The President claimed it was not surprising that there were less deaths in the past administrations because the Philippine National Police (PNP) was not doing its mandate to go after criminals and drug personalities.

“The police were not doing their work then. Why? Because they were not supported (by the government). The mayors who are also drug lords were the toughies,” he said.

The Chief Executive also assured the public that he would not tolerate any of his relatives and friends found violating the law.

Interestingly, Mr. Duterte went soft on Cebuano businessman Peter Lim, his “kumpadre” whom he named as one of the country’s biggest drug lords.

After threatening to shoot him dead, the President granted Lim’s request for a meeting at Mr. Duterte’s satellite office in Davao City, an opportunity never given to about 7,000 drug personalities killed in his drug war.

Said the President: “I serve my country first and I will end friendships if need be.”  SFM