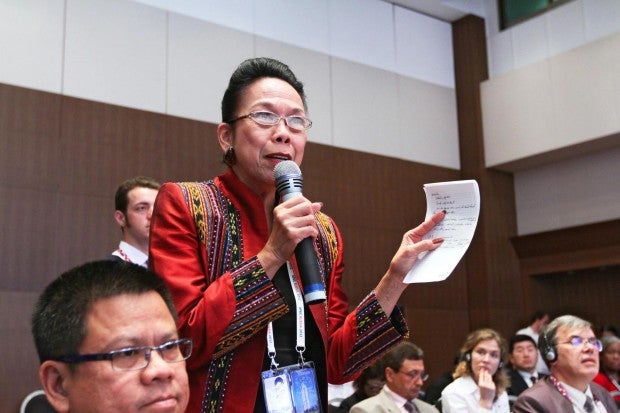 A congresswoman representing the youth scored Commission on Higher Education (CHEd) chairperson Patricia Licuanan for claiming the P8.3-billion budget for free tuition would not benefit the poor.

Kabataan Rep. Sarah Elago made the statement in response to an interview of Licuanan where she said the P8.3-billion realigned budget for state universities and colleges (SUCs) would benefit the moneyed students because only eight percent of the poor are enrolled in SUCs.

“You ignore the fact that the poorest could not enter college precisely because the tuition and other school fees are expensive and they could not afford it,” Elago said in a press conference at the House of Representatives.

Elago said Licuanan’s statement runs counter to the intention of Congress in realigning the budget for SUCs, which was to provide free tuition to the poorest students.

Elago said the eight percent figure would only amount to not more than 160,000 students because there are 1.6 million students enrolled in SUCs.

Elago said only providing free tuition would allow poor students to be enrolled in SUCs.

“If they will be given free tuition, that would open the gates for our SUCs to more students from the poorest sectors,” Elago said.

Earlier, Congress sitting as bicameral conference agreed to realign the P8.3 billion originally allocated by the House to the Department of Public Works and Highways (DPWH) for Autonomous Region in Muslim Mindanao (ARMM) development projects to the CHED to provide free tuition for SUCs.

In an interview with Winnie Monsod aired on GMA News TV, Licuanan said she was worried only the moneyed students would benefit from the P8.3-billion free tuition budget.

“But having said that, there are some issues and concerns… The poorest of the poor are not yet in college. They have been knocked out long ago and enrollment of the poorest quintile in higher education is only 8 percent. So it’s not going to benefit the poor,” she added. RAM/rga