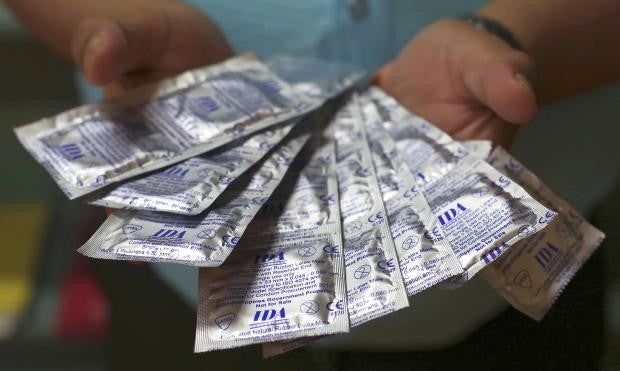 A Filipino health worker shows condoms that are given for free to the public by the Department of Health in Manila, Philippines, on Thursday, Dec. 8, 2016. A human rights watchdog says the Philippines is facing one of the fastest growing epidemics of HIV in the Asia Pacific, fueled by government policies that restrict intervention, including access to condoms by men who have sex with men. (Photoby AARON FAVILA/AP)

Two more senators  were cold to  the plan of the Department of Health to  distribute condoms in schools as they  pushed for sex education rather than encourage  underage  students to engage in sex.

Senator Grace Poe, meanwhile, would rather take the side of caution rather than exposed children to promiscuity.

“I think that they should be also aware of the reality but you know children can be promiscuous,” Poe said in a separate interview.

“I really think education is very  important. It’s not to impose our own beliefs on that but to guarantee also their health, well-being, and safety,”  she  added.

Poe also believes that the use  of condoms  should also be made available to women but it should not be imposed on them.

“It’s  about  choice…Hindi dapat ipilit pero dapat available kung gusto nila (It should not be compulsory but should be accessible),”  she said.

Aside from Pacquiao and Poe, Senate Majority Leader Vicente “Tito” Sotto  III has been vocal against the  DOH’s planned distribution of condoms to high school students.

While she supports the administration’s family planning policy and believes that the government should extensively search for solutions regarding the population increase, the objective of DOH in giving out condoms may do good, or may not.

(It can be good if it is part of a bigger program to educate the person before you give these out. But for me, if it is just for the sake of just giving out, that is dangerous. It is dangerous in a sense that we might be promoting the culture of promiscuity.)

Robredo said that the distribution of condoms should be a part of a bigger or more comprehensive program in the implementation of the reproductive health law.

(It should be intended for education, with freedom of informed choice. This should be followed, not just distributing condoms.)

The DOH on Tuesday said that it will push through with its plan to distribute condoms in schools despite criticisms from different groups, including the Catholic Church.

The agency said that distribution of condoms will help educate the students on human immunodeficiency virus (HIV), which causes the dreaded Acquired Immune Deficiency Syndrome (AIDS), especially now that cases of HIV and AIDS in the country are increasing. /ac