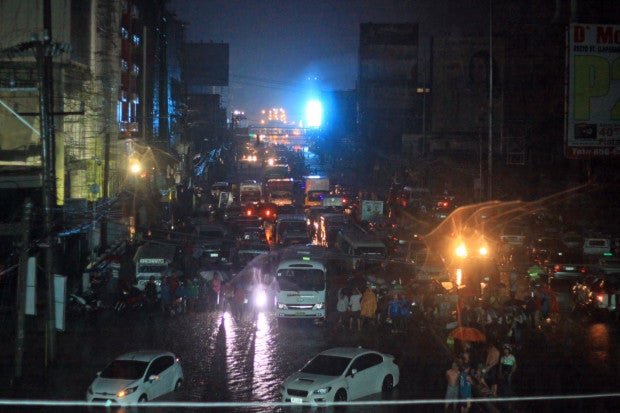 CM Recto Ave., one of Cagayan de Oro’s major thoroughfares, was flooded with rainwater and motorists and commuters were stranded after heavy rains on Jan. 16, 2017.  Cagayan de Oro was one of the cities and provinces of Mindanao hit by heavy rains and floods.  Photo by Jigger Jerusalem, Inquirer Mindanao

ZAMBOANGA CITY — At least five people who were earlier reported to be missing were found dead in Zamboanga del Norte following the flooding in that province on Monday.

A seven-year old boy remained missing in Barangay Mate in Manukan town as of Tuesday evening. Also reported missing were Pepe Randes, 57, and Jeffry Gamtiao, 35, both of Roxas town.

Kornessa Paras of the Provincial Disaster Risk Reduction and Management Office said low-lying areas of at least seven towns were submerged in water, with flood rising as high as six meters.  SFM