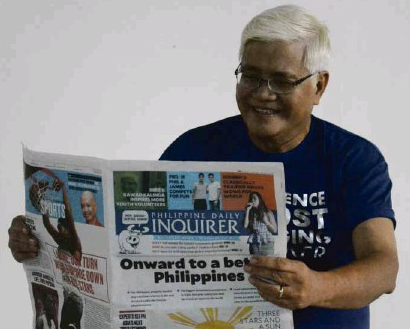 Meloto: The Inquirer has been the first thing I read every morning over breakfast.

There is a tender fondness in Antonio Meloto’s voice and a twinkle in his eye when he talks about the Inquirer—something akin to a man talking about his dearest and oldest friend.

“Ever since it came out during the Edsa revolution, the Inquirer has been the first thing I read every morning over breakfast,” says the 66-year-old founder of social enterprise Gawad Kalinga (GK).

He even draws parallels between the work GK has been doing for the past years and the stories published in the broadsheet, particularly those that reflect the spirit of “people power.”

“[The] People Power [Revolution] took to the streets. In Gawad Kalinga, we go to the streets to build communities, especially after a disaster. We also transform urban slums all over the country, as well as in other countries like Indonesia, Cambodia, Vietnam,” says Meloto.

“People power, for us, is really about solidarity and ending poverty in the Philippines,” he adds.

Just like how his favorite broadsheet has taken on a new look as part of the #MyINQUIRER campaign, highlighting the new media quintet experience, Meloto, one of Inquirer’s ambassadors, is busy with GK’s newest endeavor, or what he calls the enterprise’s “second phase.”

“We’re focusing on social artistry: We’re building a lot of startups, business incubation. We’re providing sustainability in the rural areas by attracting the brightest in our communities and giving them quality education,” says Meloto.

He is referring, primarily, to SEED (School for Experiential and Entrepreunerial Development) Philippines, which is located at the GK Enchanted Farm in Angat, Bulacan. First opened in 2014, Meloto says the Farm Village University now has over 130 scholars enrolled in a three-year social entrepreneurship course.

“I’ve never seen a more hardworking, dedicated bunch, who are learning really fast because they know this is their chance [to improve their lives],” Meloto says. “They get up at 5:30 in the morning, work for half a day, and the other half they spend learning about cost accounting, financial management, environmental science, English and French.”

The goal, adds Meloto, is to replicate SEED’s program in other parts of the country, and, hopefully, produce half a million social entrepreneurs by the year 2024.

Also part of Meloto’s drive to further grow GK is to create “economic platforms” for those in rural areas. Aside from the university, another component of the GK Enchanted Farm is its “silicon valley” for budding social entrepreneurs; basically, an environment wherein one is equipped with the proper tools to start their social enterprise.

Meloto is grateful, he says, that many privileged individuals—from corporations to philanthropic Filipinos and even foreigners—continue to support what GK does.

“We now see that we can only empower [the underprivileged] by having the most privileged not just involved but really see the poor as family, as partner,” he says. “We have so many enterprises here now, wherein we have children of farmers partnering with the French in many industries, whether it’s [raising] free-range chickens, making duck burgers, or raising turkey, developing the goat industry, or essential oils.”

Meloto adds: “The bottom of the [economic] pyramid has a motherload of precious human gems. If we provide the opportunity for the best quality education, as well as access to capital and market—wow. We will build a new economy from the bottom up.”

Malaysian blogger Shirley Maya Tan is just one of the kindred spirits who was inspired by Meloto to do more for others. Born into what she describes a life of luxury wherein her daily worries revolved around what more she could buy (“Another Porsche or Range Rover? Another Louis Vuitton or Hermes?”), Tan underwent a midlife crisis which made her realize how unfulfilled she was.

“I had lots of stuff, but I still felt empty. I needed to find meaning in my life,” says Tan. “I thought, if I could find everyday heroes on the ground, they would have a lot to teach me about living a more purposeful life.”

Her pursuit led her to Meloto, who had a speaking engagement at a university in Singapore in 2009. “He ended his speech by saying, ‘Never stop hoping for your country. Never stop caring for your people. Always demand greatness from yourself so you demand greatness in others.’ It just blew me away, because before, I did not care for anyone, much less my own country,” says Tan.

Since then, Tan has been working closely with GK, initially creating promotional videos and, now, investing in the university and the social enterprise platform. She has even immersed herself in the poorest GK communities, including those in conflict areas in Mindanao. “It has been amazing. Lives are really changed from the ground up,” she says.

As GK continues to build its countryside economic platforms, Meloto believes it is the likes of Tan who can truly open doors for aspiring entrepreneurs in the marginalized sector.

“There is so much untapped wealth in the countryside. Our thrust right now is to bring the people from the city to the rural areas, the rich to the poor,” he says. “There’s really no limit to excellence. Why should we deny [the poor] the chance to be excellent, and just see them as objects of charity?”

He recalls what the Inquirer labeled him as in 2006, when the paper awarded him the honor of “Filipino of the Year”: a “radical optimist.”

“It has been 10 years, and that hasn’t changed,” says Meloto. “My work has only gotten bigger, because when people see the glass as half-empty, I always see it as half-full, which I need to fill up. Just like the Inquirer—we cause disruption, but we also initiate innovation, and we always prioritize social inclusion. No bias, no prejudice. You just really have to connect with the good in everyone.”