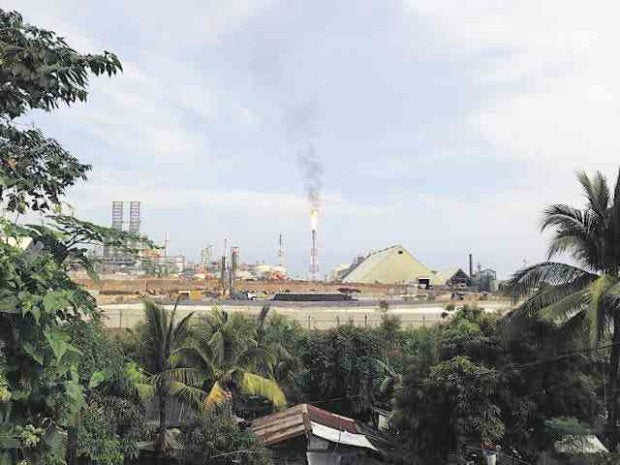 MANILA — Are the health problems of residents in Limay, Bataan caused by ash fall or a spill from a byproduct storage facility being used by the San Miguel Corporation’s (SMC) subsidiaries in the area? The national government is set to settle the matter once and for all with a study to be conducted this week by the Department of Environment and Natural Resources (DENR).

In a dialogue with anti-coal power plant protesters and Bataan residents at the DENR national office on Wednesday, DENR Secretary Gina Lopez asked the stakeholders to give the DENR  one week to be able to coordinate with the Department of Health and validate the complaints.

Limay residents, particularly those in Barangay Lamao, started complaining late last year of skin and respiratory diseases, as well as pollution in the air, rivers and along coastlines.  They blamed it on windblown and soil-seeping ash coming from the stockpile of byproducts from the SMC Consolidated Power Corp. (SMCCPC) plant and a coal-fired plant of the Petron Bataan fuel Refinery. Both SMCCPC and Petron Corp. are subsidiaries of SMC.

Due to the complaints, the DENR has issued directives stopping the dumping of ash in the shared stockpile.

“Our problem with the health data is that not all residents go to health centers for check-up,” said Derek Cabe of the Nuclear-Free Bataan Movement and the Coal-Free Central Luzon, who has been coordinating closely with the affected communities. “But if you ask around the drugstores in the areas, the ‘bestsellers’ are [medicines] for respiratory problems. We noticed that started when the plants started to operate, and now it’s been getting worse. Where else would you attribute the diseases?”

But SMC President Ramon Ang denied these reported illnesses have been caused by the SMC-affiliated plants. “I was there yesterday…there is no smoke, no pollution there. A lot of these things, like those pictures being shown of “galis” [scabies], are hearsay,” Ang said, when Lopez called him up and put him on speakerphone to answer the protesters’ issues on the spot.

“I will not allow anybody to suffer. I toured media around the refinery area, [Barangay] Alangan and everywhere. There is no smoke, no dust…We’re committed to help the environment,” Ang said.

“Please tell them not to jump to conclusions. If it’s scabies, don’t blame it on us. Nevertheless, I will pay for it, whether it’s scabies, whatever their illnesses are,” Ang said.

Ang denied that the SMCCPC plants have been producing coal dust, noting that the first of four plants only started to run this year on a “commissioning” basis using diesel. “This is a new type of power plant that does not dump anything on the ground,” Ang said.

Meanwhile, Ang said the byproduct of the Petron plant was only lime powder. “The material is limestone. That is what’s being fed to the four units of Petron boilers.”

As for the byproduct stockpile shared with Petron, “All these materials will also be used to mix cement,” Ang said. The only thing missing is a permit from the DENR to transport the materials out of Bataan and to the cement factories, a permit Lopez committed to issue as soon as she receives an application for the permit.

“I want to remove the ash. It’s a mountain there and the fact is it may be this mountain that is causing all the health problems,” Lopez said. Lopez said the ash should always be transferred to an enclosed lot. The collection of the byproducts will also be done through suctioning. Lopez hopes to see a demonstration of the process before she issues a permit to transport the materials.

Lopez also said the DENR would ask the Department of Health to validate the health complaints.

“We follow scientific processes committed to integrity. We gave [the SMCCPC] a show-cause order [which they have] until Friday [to answer]. And on top of that, we will go to the [Department of Health], we will go [to Limay] and we will conduct a study. Give us one week. I have to follow due process but I want to tell you my heart is for you,” Lopez told the protesters.

Lopez has also threatened DENR officials in Central Luzon: “Any EMB official under my watch allowing suffering of the people, you’re out.”  SFM/rga