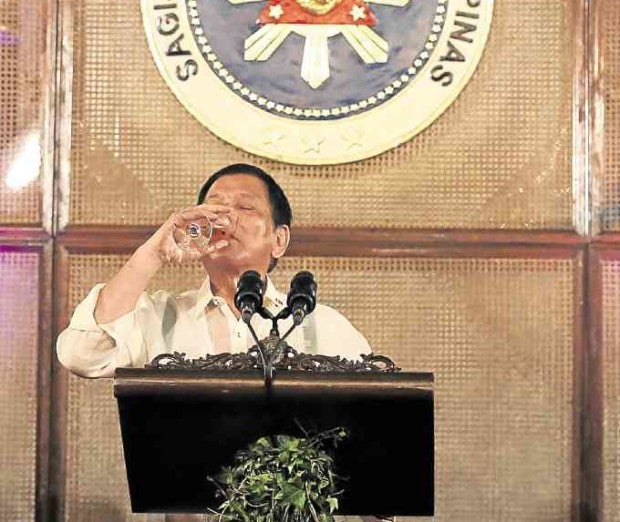 ‘KANPAI’ Before meeting with the mayors, President Duterte drinks cider in leading the toast to members of the diplomatic corps in his first “vin d’honneur” in Malacañang. He told them that the Philippines would strengthen existing friendships and forge new ones with nations. —JOAN BONDOC

That was the message mayors, bused in batches to Malacañang, got during expletive-laced group meetings with President Duterte on Wednesday, according to participants.

The President brandished a purported list of officials—including mayors, legislators and barangay captains—but the mayors had no opportunity to check if they were on it, according to one source.

In a text message, Mayor Krisel Lagman Luistro of Tabaco City in Albay said: “The President warned us that those involved in drugs should stop or face the consequences. He specifically said that he will kill whoever is involved. It was fair warning.”

The President’s spokesperson, Ernesto Abella, declined to give details of the meetings, which began shortly after noon and were still going on by early evening.

Abella said the President intended to have a “conversation” with the mayors, and it was safe to assume that the narcotics trade was among the topics to be tackled.

“He has not really met with the mayors in order to directly discuss his positions, especially regarding criminality, crime and drugs. It’s safe to assume that would be part of the conversation,” Abella told reporters.

He said he would describe the meeting as a “dialogue between the President and his executives.”

Mr. Duterte met the mayors clustered according to regions.  They were brought to Malacañang by bus, shuttled from the Philippine International Convention Center in Pasay City.

On Monday, Mr. Duterte warned local chief executives to steer clear of the trade in “shabu,” or the hugely popular crystal meth.

He said those involved in the drug trade should either resign “or make a clean breast of everything, come up with a clean nose.”

“I will talk to them. With the thick document I showed you, I will tell them, ‘Look for your name there, mayor, you son of a bitch. If your name is there, you will have a problem. I will really kill you.’”

“As long as I’m President, these big shabu dealers will die and the next batch would really be these mayors. I will call them and lock them up,” he said.

Those whose names are on his narcolist would have a problem, he said.

Three mayors from Quezon province, who spoke on condition of anonymity, said the President did not link anyone in the group, mostly from Luzon, to the drug trade.

“He was cool. But he was in his natural self … cursing and all,” one mayor said in a telephone interview.

“At least in our batch, the President did not call out any name. He just kept on talking. He asked for our support in the drug war and in solving the country’s problems,” the mayor said.

The Inquirer sources said they were asked to leave their mobile phones with security personnel before they proceeded to a hall where the President met them.

Of the 39 municipal mayors and two city mayors of Quezon, only four were not able to attend the meeting, the third source said.

“Duterte was jovial. He was even joking during his 30- to 40-minute speech in our batch. But he did his usual cursing,” said another mayor, also from Quezon.

But in a meeting with another group, also from Luzon, the President was described as in “a very bad mood.”

“Mayors engaging in illegal drug trade and corruption were cursed and threatened,” a mayor in that group said in a text message in Filipino.

The source said Mr. Duterte again mentioned Vicente Loot, a former police officer and now mayor of Daanbantayan in Cebu, as among those involved.

“He was really angry at Loot,” the source said, adding that the President also named nine judges on his narcolist.

Mayor Anida Dimaukom, of Datu Saudi Ampatuan town in Maguindanao, did not attend the meeting, according to her brother-in-law, Councilor Zayton Dimaukom.

Anida is formerly the town’s vice mayor. She replaced her husband, Samsudin Dimaukom, who was killed in an alleged shootout with police in North Cotabato in October. The President had linked the couple to illegal drugs.

During a meeting with one group from the Visayas, the President said he had directed the chiefs of police of towns and cities to shoot mayors involved in drugs.

“He said he will protect the policemen and even grant them pardon if they will be convicted,” a participant said. “We were silent when the President said this while we were at the Rizal Hall. But many of us felt that we were threatened.”

“He said the list was validated but we were not shown the list and we do not know how we can check if we were mistakenly included. We might be shot by our police chief,” the mayor said.

Mabilog, who was at the meeting, kept shaking his head, according to the mayor seated near him.

“We have to be cooperative or else we will be included in the list,” Mayor Therese Sitoy-Cho of Cordova town in Cebu said, referring to a thick folder Mr. Duterte showed.

Mr. Duterte told the mayors that he would look into how each of them spent their intelligence funds and expected that it would go to the police.

“He wants our areas cleared of illegal drugs within the year,” Cho said.

The President reportedly told the mayors that the folder contained a “complete and verified list” of all local government officials, “from mayors down to barangay officials,” involved in illegal drugs.

According to Cho, there were a few mayors absent during the meeting, though she did not know who.

Referring to mayors who failed to attend the meeting, the President reportedly said:  “noted mo” (you are noted).