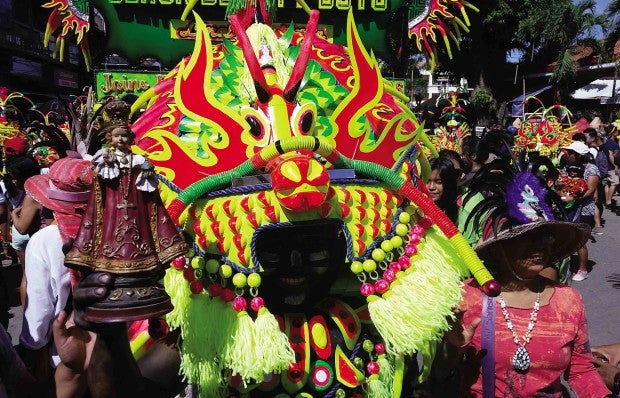 The Kalibo Sto. Niño Ati-Atihan is considered the oldest festival in honor of the Child Jesus. —NESTOR P. BURGOS JR.

ILOILO CITY—The Kalibo Sto. Niño Ati-Atihan festival in Aklan province this weekend promises to be bigger and livelier than past events.

But church leaders and festival organizers are also committed to preserve its religiosity amid the influence of commercialism.

Around 100,000 revelers and pilgrims are expected to flock to the capital town of Kalibo, especially during the peak of the festival from Friday until Sunday.

The Ati-Atihan, held every third week of January, is considered the oldest among the festivals held in honor of the Child Jesus Señor Sto. Niño.

It is known for its unique “sadsad” (street dancing), which residents and guests join, once they hear the familiar beat of drums and the melodic tune of lyre.

The sadsad will start to peak on Friday a day before the Ati tribe dance contest on Saturday.

Thirty tribes will join the four categories of the contest.

As in previous years, hotels and inns in Kalibo had been booked. Albert Menez, chair of the Kalibo Sto. Nino Ati-Atihan Foundation, Inc., said many guests are staying on Boracay Island, about an hour-and-a-half drive from the capital.

More than 1,000 policemen, soldiers and other security personnel will help secure this year’s festival.

Kalibo Bishop Jose Corazon Tala-oc reminded revelers and organizers that the festival should be focused on the Child Jesus Sto. Niño and not on merrymaking, tourism and commercialism.

“Through the years, we may have been influenced by modernity and commercialism. Let us not forget that our faith and devotion came first and are the bases of the festival,” Tala-oc told the Inquirer.

Tala-oc believed the festival has largely preserved its religiosity because of the “deep-rooted faith of Kalibonhons in Jesus.”

In the street-dancing, revelers and devotees carry images of the Sto. Niño in varying sizes, colors and costumes.

Every year, thousands flock to the St. John the Baptist Cathedral for the paepak (“to be stepped on”)—a healing rite where lay workers rub the feet of miniature wooden images of the Child Jesus Señor Sto Niño de Kalibo on parts of the body of devotees seeking treatment of various ailments.

The Pilgrim Mass would be held within the cathedral compound facing the Pastrana Park, Kalibo’s public plaza, to accommodate thousands of devotees.

The Mass on Sunday morning will precede the street-dancing centered around the plaza.

In the afternoon, devotees, mostly carrying images of the Sto. Niño, are expected to join the traditional religious procession along the main streets of Kalibo.

The procession, usually lasting up to eight hours, will culminate at the grounds of the cathedral.