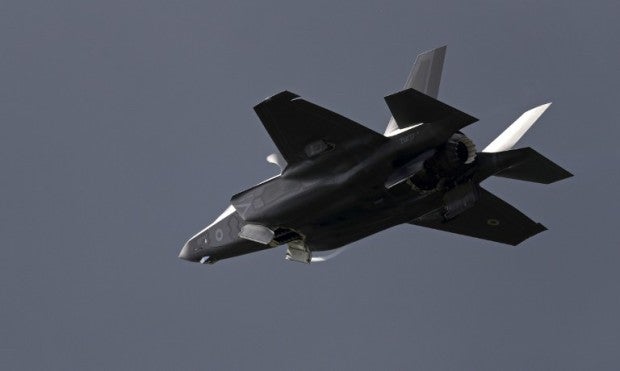 A Lockheed Martin F-35 Lightning II takes part in a flying display at the Farnborough Airshow, south west of London, on July 12, 2016.  AFP

WASHINGTON, United States — The US Marine Corps said Tuesday it has sent a squadron of F-35B fighters to Japan, marking the first operational overseas deployment for the controversial jet that is under scrutiny from President-elect Donald Trump.

The planes’ deployment to Marine Corps Air Station Iwakuni on Honshu Island marks a major milestone for the F-35, which has been bedeviled by technical glitches and soaring cost overruns.

With a current development and acquisition price tag already at $379 billion for a total of 2,443 F-35 aircraft, Lockheed Martin’s F-35 is the most expensive plane in history, and costs are set to go higher still.

The Marines’ version of the plane, known as the F-35B, is capable of conducting short takeoffs and vertical landings.

Trump last month sent shockwaves through the aerospace industry when he tweeted that he wanted rival Boeing to price out a possible alternative.

“Based on the tremendous cost and cost overruns of the Lockheed Martin F-35, I have asked Boeing to price-out a comparable F-18 Super Hornet!” Trump tweeted December 22.

The F/A-18 Super Hornet does not have stealth capabilities and has been in use since the late 1990s.

Once servicing, maintenance and other costs for the F-35 are factored in over the aircraft’s lifespan through 2070, overall program costs have been projected to rise to as much as $1.5 trillion.

“The unique combination of stealth, cutting-edge radar and sensor technology, and electronic warfare systems bring all of the access and lethality capabilities of a fifth-generation fighter, a modern bomber, and an adverse-weather, all-threat environment air-support platform,” the Marines said in a statement.

In August, the US Air Force declared an initial squadron of F-35A stealth fighters as ready for combat and said an overseas deployment for that version of the plane was likely early this year.

The US Navy’s version of the plane, the F-35C, is built to land on aircraft carriers. CBB