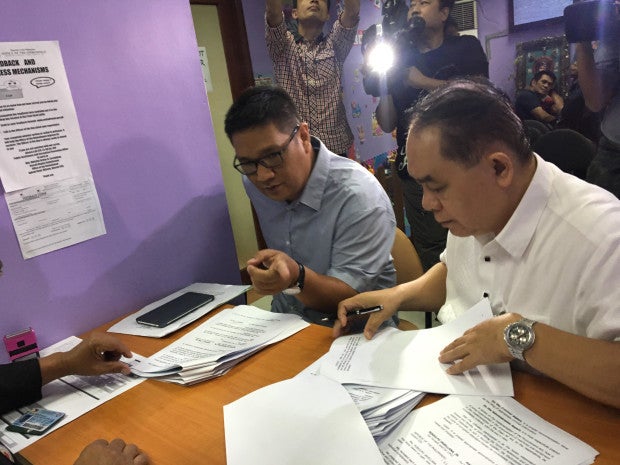 MANILA — Environment Secretary Regina Paz Lopez is facing a complaint at the Office of the Ombudsman over her supposed inaction on the alleged irregularities in the air quality monitoring system in place since 2006.

Citing their “educated guess and reliable information,” the United Filipino Consumers and Commuters and Airboard Company asked the Ombudsman to probe Lopez for unspecified criminal and administrative charges over the alleged “whitewash” of the contract  with the supplier Electrobyte Environmental Concerns Corp.

Instead of directing an investigation, Lopez allegedly referred the matter back to the very people involved in the alleged anomalies, according to the complaint filed by UFCC president Rodolfo Javellana, Jr., and Airboard managing partner Manuel Galvez.

Named as “nominal parties” were resigned Undersecretary Leo Jasareno, and Environmental Management Bureau officers Jean Rosete and Teresita Peralta. The complainants said they were only made respondents to allow them to “give their say on the matter.”

It claimed that more DOAS units were later procured in 2010, without requiring a performance report of the previous acquisition, as well as market research.

The complaint also claimed that the terms of reference were phrased and formulated so that only Electrobyte would hurdle prequalification.

On Aug. 2, 2016, the complainants said they showed Lopez a PowerPoint presentation to bring “the evil and the devil” to her attention.

At the time, they recounted that she showed alarm and was very receptive. The complainants quoted Lopez as saying “I will not tolerate” and “heads will roll.”

Later on Sept. 9, 2016, they wrote Lopez a letter to detail “the evil that exists in the management of air control, air pollution and air monitoring.”

But, the complaint said Lopez ended up referring the case to the EMB, “the very persons who were being complained of.” It citing two reply-letters dated Sept. 27 and signed by Undersecretary Analiza Rebuelta-Teh.

The complainants said Lopez should have ordered an investigation or referred the case for preliminary assessment by an independent examiner, instead of referring the case to the EMB.

“Of late, educated guess and reliable information… will confirm the point that the usual thing happened: a whitewash had succeeded,” the complaint read.

It added that Lopez was even “overheard commending the very persons not only for what they are doing, but also for their competence.”

Accusing Lopez of joining the “bandwagon,” the complaint wailed about the “death penalty to the Clean Air Act and slow death to the Filipino people.”

It raised possible consequences in the case of nuclear disaster.

“Sudden death, and massive at that, can—of course—occur, such as if there happen to be a nuclear fallout, and that might not be detected by our faulty machine,” the complaint read.

“And when the drive against drug-addition [sic] and drug-related problems has started, with unrelentless ‘killings,’ herein respondent Secretary Regina Paz Lopez must have been given the feel, that everybody, in the Duterte Administration must be ready ‘for the kill,’ so to speak (but here it is only being used figuratively),” it read.  SFM

Read Next
Duterte admin eyes cap on GOCC bonuses
EDITORS' PICK
High inflation: Your P1 is now worth only 87 centavos
UK’s Boris Johnson will resign, BBC reports
Geek out at TOYCON 2022 powered by Smart Signature
House energy committee chair Arroyo bats for cheap electricity
High-risk pregnancy: Reducing your risk is in your hands
Unemployment rate up to 6% in May
MOST READ
Suspect in grisly killing of missing woman in Bulacan arrested
Hong Kong suspends flight bans as it eases COVID-19 rules
Kim Atienza’s daughter flaunts bikini body in response to critics of her ‘revealing photos’
Cop slain in Isabela ambush
Don't miss out on the latest news and information.