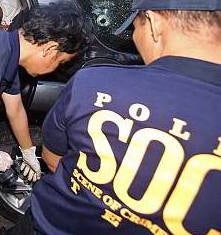 MANDAUE CITY, Cebu — Shortly after posting bail on drug charges, the city’s number one drug suspect was killed in an ambush past noon on Tuesday at the corner of P. Rosal and M.C. Briones Street here.

Pablito Loberanes, 42, died from gunshot wounds in the body while his three companions were rushed to the hospital.

Injured were Jerson Hermosa, Daisy Pacho and a woman identified only as Gang-Gang.

Police were still hunting down the four men on board two separate motorcycles who blocked and fired shots at the Suzuki van that Loberanes and his companions were riding in when they were attacked.

Initial police investigation showed that the victims were heading home to Barangay Pakna-an after Loberanes posted bail for possession of illegal drugs and firearms at the Mandaue City Palace of Justice in the reclamation area.

Four men on board two motorcycles blocked the path of the van, about a kilometer away from the Palace of Justice.

Loberanes was the city’s first drug suspect who surrendered in June 2016 shortly after Director General Ronald “Bato” dela Rosa, Philippine National Police (PNP) chief, ordered the implementation of Oplan Tokhang, a campaign in which policemen go from door to door, persuading known drug users in communities to surrender and submit to rehabilitation.

He went to the Mandaue City Police Office (MCPO) in the evening of June 8, 2016 and turned over to the Investigation and Detective Management Branch (IDMB) packs containing shabu and a pistol with ammunition.

Loberanes then told police that he wanted to start a new life.

He was later released from detention because there was no case filed against him.

But he was arrested for possession of illegal drugs and firearms on Jan. 2 after he figured in a vehicular accident along M.C. Briones Street in Barangay Basak.

Senior Police Officer Froilan Gomez, who responded to the report of an accident, recovered a .38-Smith and Wesson revolver and 14 small packs of suspected drugs from Laboranes’ vehicle.  SFM/rga