Finding a voice in the wilderness 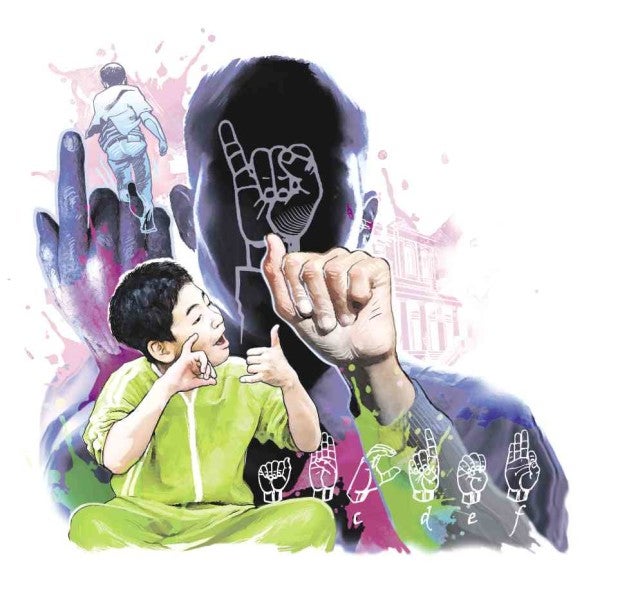 It was New Year’s Eve, the noisiest day of the year, when it was customary for Filipino revelers to make as much noise as bearable to chase bad spirits away.

At the Sarreal household, Arlene watched as her year-old son Arbien grabbed a table for support as he took his first steps. In a fit of mischief, his grandmother Dading came up behind him and threw a pot cover that created a huge racket. But baby Bien appeared oblivious to it.

It was at that moment that Arlene knew something was wrong with her child. All along, she had thought him well-behaved, a quiet child who was probably a late bloomer when it came to speech.

But the best doctors at several hospitals all agreed: Bien was suffering from total hearing loss. He was deaf.

That was 10 years ago. Today, Bien is a Grade 3 student at the Philippine School for the Deaf (PSD) in Pasay City, one of the 3,401 deaf elementary students in public schools. His family is one of the thousands who struggle to keep their deaf children in school. 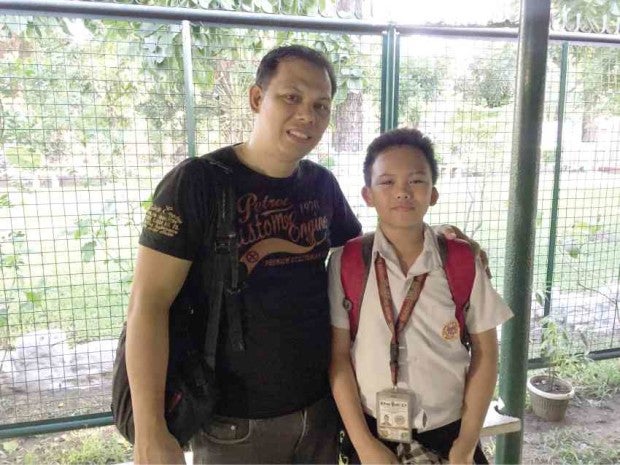 COPING Benjie Sarreal, together with his 11-year- old son Bienwho is deaf, smiles for the camera after sharing how he now struggles without his wife Arlene by his side. Photos by Kristine Angeli Sabillo

To pay for the expense involved in keeping Bien in school, Arlene took a job as a domestic helper in Dubai and planned to send at least P5,000 monthly, with P4,000 of it allotted for her son’s commute to school. “It’s very difficult to be away from my family but I need to,” Arlene said in an online interview.

At the PSD, students get more attention from teachers, while parents also receive free lessons on sign language, she said.

On an overcast day, the schoolyard exploded with laughter as the young students were released from class. Several joined a game of tag as their parents watched from the waiting area. As rain started to fall, one of them, Rowena Lucero, walked up to her son Matt and Bien. “It’s raining. Stop playing now,” she chided them in sign language.

Rowena is a close friend of Arlene, who keeps a watchful eye on Bien. Today, she told him to wait in school for his father Benjie who came more than two hours later. He had to fetch an older son from school in Cavite before going to the PSD, he explained.

With Arlene now in Dubai, Benjie said it was difficult to take care of two sons. He’d wake up at 3 a.m. to cook breakfast and bring Bien to school, not easy considering that he comes home past midnight from his job as a manager in a fastfood outlet.

“We didn’t really want (Arlene) to work abroad because no one will take care of the children,” he said, looking dazed.

Despite the challenges, Benjie said they had never thought of transferring Bien back to Cavite. “When he is at the PSD, we do not have any problem. The other children are like his siblings,” he said.

Department Order No. 72 highlighted the need get more children with special needs in school.  According to the 2000 Census, at least 10,432 deaf children are of elementary age, but only 32 percent (or 3,401) of them are in public schools. The government has no data on how many are enrolled in private schools, or are not enrolled at all.

To address the problem, DepEd has been training public school teachers on special education, said Olinares. There’s a plan too to have sign language classes for teachers, she added.

If the plan pushes through, children like Bien no longer need to travel to Metro Manila to study at the PSD, which has 22 percent of its students coming from Cavite. Schools in other provinces should be able to accommodate deaf children as well, even in regular classes with hearing students, the DepEd official said.

But regular classes have limitations, said PSD teacher Cristina Amon.  At PSD, each class has a maximum of 15 students, while in mainstream classes, “a regular teacher who has to teach 40 students also has to attend to deaf students who need special or modified instructions,” she added.

SANCTUARY The Philippine School for the Deaf (PSD) is a gated public school that has a spacious lawn and playground where its deaf students can play. PSD was established in 1907 during the American occupation. It has 618 students and 76 teachers. It follows the same curriculum as other public schools but also has speech and sign language lessons.

Deaf student Raymond Manding knows how that felt. He was four when he was enrolled in a regular school because his parents, an engineer and a social worker, did not know of schools for the deaf in Bohol. Every day for a year, Raymond would go to class and stare in silence as his teachers and classmates used their voices to communicate.

He also got a lot of teasing. “I felt bad being bullied because I was (the lone) deaf (student),” Raymond said during an interview with an interpreter. They wrote hurtful words and made “bad gestures,” he said.

It was the school principal who suggested that his parents transfer him to Tagbilaran City Central Elementary School, an inclusive public school, where Raymond met other deaf students and learned how to sign. He flourished in his new environment and earned a reputation as a smart and diligent student.

But high school turned out to be different. Although the school offered classes for the deaf, the teachers weren’t as committed to the students.  “They just give you light work and let you do it on your own,” Raymond said.

Because he was among the smartest in class, his teacher would ask him to tutor his deaf classmates on math, science and history. Raymond said he had to think of creative ways, such as using comics, to help them learn new things. While this helped hone his teaching skills, Raymond said the class lagged behind without adult supervision.

Lowering standards for deaf students is a common mistake among teachers of deaf students, said Nicky Perez, dean of St. Benilde’s School of Deaf Education and Applied Studies (SDEAS). “They don’t believe in what the deaf can do. They don’t challenge themselves to find other ways to teach deaf kids,” she said, adding that the lowered standard becomes a problem when deaf students graduate high school and apply for college.

Perez said the uneven preparation in high school means almost all incoming students require a bridging program. The “deaf learner’s preparatory course” teaches incoming freshmen academic concepts and Filipino Sign Language and weeds out students “who will not be able to succeed in college,” she said, since SDEAS offers scholarships to 98 percent of its student population and spends up to P1.2 million for each full scholar.

When he was a SDEAS full scholar, Raymond, who is now the school’s deaf advocacy coordinator, had access to books, videos and computers. He was also able to join arts and sports clubs, opportunities not available in public schools. Such activities helped him become the youth head of the Philippine Federation of the Deaf and an advocate of Filipino Sign Language and e-learning for deaf students. He has a scholarship to take up graduate studies at the Multimedia University in Malaysia next year.

He dreams of joining the government when he returns from Malaysia to help make educational materials for the deaf more accessible, Raymond said during an interview online.

Raymond’s case echoes that of 141 other SDEAS graduates who are gainfully employed. But of the 596 graduates of the course, many are without work—either because they are not fit to work or the companies they had applied to do not accommodate persons with disabilities.

Some employers think it too difficult and costly to hire deaf people, Perez said.  But people should realize that “disability comes from society—from societal barriers, attitudinal barriers, infrastructure barriers.”

Once people take down those barriers by making buildings accessible to those with physical disabilities or making institutions accessible to deaf people through widespread use of sign language “then they wouldn’t be disabled anymore,” Perez said.

Read Next
Is Sokor businessman victim of ‘tokhang for ransom?’
LATEST STORIES
After winning title, time for LA Tenorio to give back to Batangas folk
‘Mia’: Rom-com with a cause a career-boosting showcase for Coleen Garcia
No.13 lucky for Orlando Bloom
The ties that bind: Why the guys of Black Eyed Peas prefer to stay together
How Yam handles flirtatious guys
MOST READ
Nadine Lustre’s phone stolen in Brazil
Gretchen Barretto’s daughter Dominique graduates magna cum laude from California college
Ginebra beats Meralco again to capture PBA Governors’ Cup title
Will you be the first P16 Billion Powerball jackpot winner from the Philippines?
Don't miss out on the latest news and information.