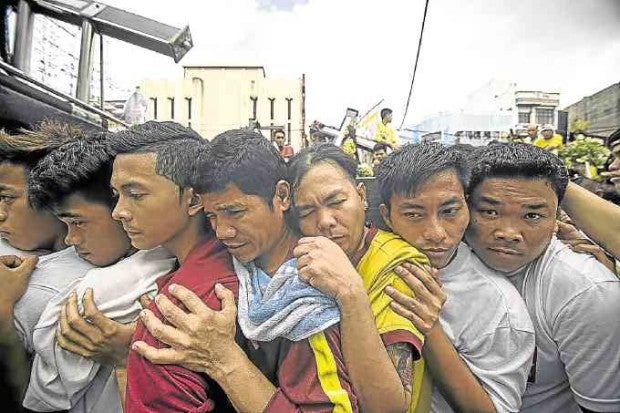 FAITH IN THE FLESH Like the last time they converged in Manila in January 2016, devotees whose lives have been touched by Señor Nazareno will again be too many to count. —PHOTOS BY JOHN PAUL AUTOR

The single biggest religious gathering in the country also poses one of the toughest challenges for security officials, who earlier cited as “serious” reports that Islamic extremist groups are threatening to stage terrorist attacks to disrupt Monday’s grand procession of the iconic Black Nazarene.

Which is why the first “traslacion” under the Duterte administration also comes with a rarity: Two embassies have issued travel advisories citing possible terrorist threats in connection with the Catholic tradition that started in 1767, during the Spanish colonial era.

Two days before Manila once again draws millions of mostly male, barefoot devotees, the police flexed their muscle and launched a crackdown right in the city’s Quiapo district, near the basilica that houses the famous image of the cross-bearing Christ.

At least 80 people—including seven minors—were rounded up in a series of predawn operations at Quiapo’s Islamic Center.

Chief Insp. Jay Dimaandal, chief of the Manila Police District’s (MPD) Special Operations Unit, said the mass arrests were “in relation” to the Jan. 9 grand procession, which will bring the Black Nazarene back to Quiapo Church after a vigil at Quirino Grandstand.

Last year, the procession was said to have attracted 5.5 million people and took 22 hours to finish. Two devotees died and about 600 were treated for injuries they sustained after jostling their way through the thick swarm of worshippers hoping to touch the image, which many believe to have miraculous powers.

Around 5,000 policemen then secured the route while 1,000 military personnel were also placed on alert in case the situation goes beyond the controlled chaos of religious fervor.

The MPD did not say whether the persons arrested at the Islamic Center were being linked to the terrorist threats. Supt. Olivia Sagaysay, chief of Station 8 whose members took part in the operation, said the officers were serving at least nine arrest warrants and two search warrants when they entered the area.

Firearms were also confiscated in the raids, according to Chief Insp. Ronald Andres, head of the MPD warrants section. A grenade was also seized, along with 16 sachets of suspected “shabu” (crystal meth), and two digital weighing scales, Sagaysay added.

On Friday, Philippine National Police chief Director General Ronald dela Rosa said there were reports that Mindanao-based Islamic groups, such as the Maute group and Ansar al-Khilafa, whose leader was killed during a police operation, were planning retaliatory attacks in Manila. 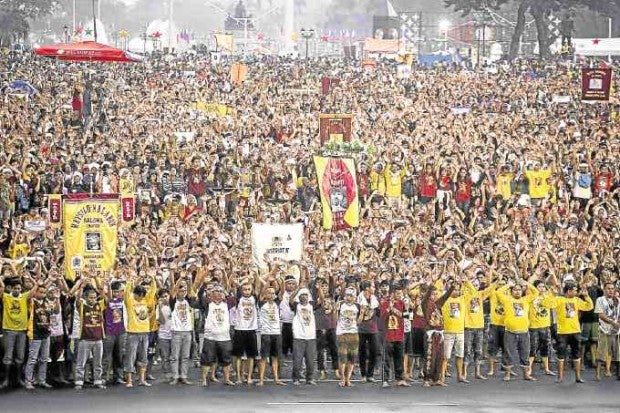 But a day later, Manila Mayor Joseph Estrada issued a statement saying the possibility of such attacks was “very minimal” and that no terror threat related to the traslacion had been detected.

National Capital Region Police Office director Chief Supt. Oscar Albayalde, who oversaw the procession of Black Nazarene replicas around 3 p.m., said that while the police “cannot discount the possibility of a threat” because of the military offensives in Mindanao, “clear or imminent danger is not there.”

As part of security measures, cell phone signal jammers will be activated along the procession route, according to Col. Llewelyn Binasoy, chief of the Joint Task Force NCR of the Armed Forces of the Philippines.

Chief Supt. Joel Coronel, MPD director, also advised the devotees not to bring bags or backpacks, which he said are usually prohibited in big, crowded events, lest they be suspected of carrying explosives, weapons and other dangerous contraband.

All you need is a towel

Policemen manning the traslacion route may accost persons carrying bags and won’t allow them near the procession, the official said.

“All you need is a hand towel or handkerchief, and plastic water bottle,” Coronel said. For those who really need to bring bags, they may deposit them in any of the 10 MPD command posts located near the procession route, he added.

“If you notice suspiciouslooking persons or situations, please report them to any security personnel. We will go to them and accost them,” he said.

While security forces would be keeping a close watch, the devotees themselves should be vigilant and look after each other’s safety, Malacañang said on Saturday.

‘Go in faith, but be careful’

“Go in complete faith but also continue to be watchful and careful,” the President’s spokesperson, Ernesto Abella, said over the government-run Radyo ng Bayan. “Let us just be careful, remain calm and sober, and let us again look out for one another.”

In what may be considered a rarity in the history of the traslacion, the US Embassy on Friday issued a security message calling on all Americans in the Philippines to exercise caution, as it also announced that the embassy will be closed on Monday.

The embassy said it expects the traslacion to last about 20 hours due to the mammoth crowd along the 4.5-mile procession route from Quirino Grandstand to Quiapo Church.

It also warned that travel in downtown Manila would be “difficult or impossible” because of the road closures.

The embassy stressed the importance of taking preventive measures and the urgency of “exercising caution in the vicinity of any large gatherings, protests, or demonstrations.”

“The police have also warned that all cell phone coverage will be jammed in the vicinity of areas along the route of the procession, with expected cell phone disruptions throughout Metro Manila,” the security message said.

The embassy of the United Kingdom also issued a travel advisory, citing information of a terror threat received by the Department of the Interior and Local Government.

“The Philippine Ministry of the Interior has received information on possible terrorist threats to the procession,” the advisory released on Saturday said.

It reminded British nationals in the country to “take particular care in crowded places and follow the advice of the local authorities.”

“Road closures and crowds of people will make travel in the downtown Manila area difficult or impossible and telecommunications will be disrupted,” it added.