LTFRB chair Delgra, 2 others sued for graft, neglect of duty 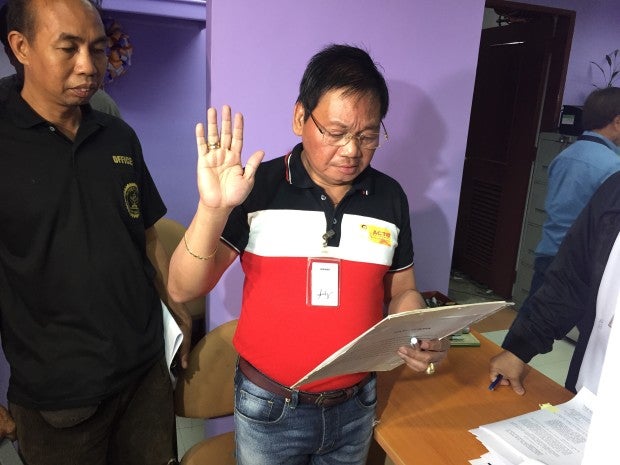 ACTO national president Efren de Luna files before the Ombudsman a complaint against LTFRB chair Martin Delgra III and two others for graft and neglect of duty. MARC JAYSON CAYABYAB/INQUIRER.net

A transport organization on Thursday filed a graft and neglect of duty complaint against Land Transportation Franchising and Regulatory Board (LTFRB) chairman Martin Delgra III for his failure to address requests for price increases.

The complaint was filed against them for their alleged “inaction and inefficiency” in performing their duties and failing to act on ACTO’s May 2016 motion for a fare increase and for a reversion of the minimum P7.50 fare for public utility jeepney.

ACTO said it filed another motion for provisional fare hike on December 2016 but the LTFRB has yet to act on it and set it for hearing.

ACTO accused the officials of “sleeping” on cases pending before them “for a significant period of time.”

ACTO said it was frustrating that LTFRB would not take action on the aforementioned motions while it was hasty in allowing transport network companies like Grab and Uber to operate and implement their own fare scheme, causing prices to surge even without undergoing the mandatory process according to the Public Service Act.

It added that LTFRB’s failure to perform its duties in resolving motions before it caused “inconvenience and prejudice to the operators, drivers and general public.”

“Clearly, respondents’ gross neglect of duty, incompetence and inefficiency in action upon matters before them gravely affects the transport sector, particularly PUV operators,” the complaint read.

Delgra and the two board members were sued for violations of the Code of Conduct and Ethical Standards for Public Officials; violation of Section 3(e) of the Anti-Graft and Corrupt Practices Act; and gross neglect of duty, inefficiency, incompetence in the performance of official duties, and conduct prejudicial to the service, under the Administrative Code. IDL/rga