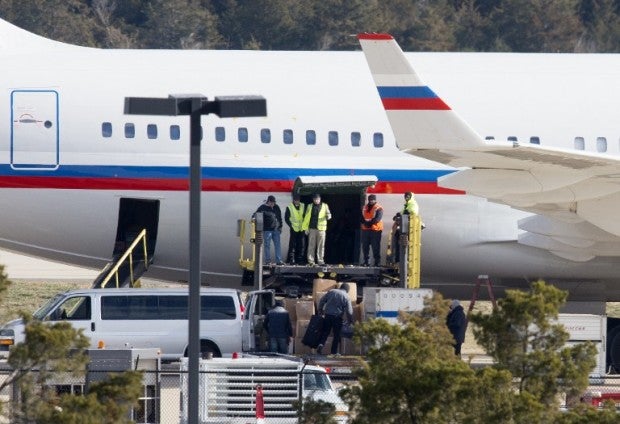 A Russian aircraft is loaded with cargo at Dulles International Airport December 31, 2016, in Sterling, Virginia, just outside Washington, DC. The special flight arrived to pickup Russian diplomats expelled by US President Barack Obama as part of sanctions imposed on Russia for suspected cyberattacks during the US election.  AFP

MOSCOW, Russia — A plane carrying 35 Russian diplomats expelled from the United States over Moscow’s alleged interference in the presidential election took off from Washington on Sunday, Russian news agencies reported.

“The plane has taken off, everyone is on board,” said the Russian embassy in Washington, quoted by the state-owned RIA Novosti agency.

Relatives of the diplomats are also onboard the plane flown specially from Russia, for a total of 96 passengers onboard.

The expulsions were part of a package of sanctions ordered by President Barack Obama on Thursday in the final weeks of his administration.

“We can confirm that the 35 Russian diplomats declared persona non grata have, along with their family members, departed the United States,” a State Department spokesman told AFP.

The diplomats, described as intelligence operatives based at the Russian embassy in Washington and the consulate in San Francisco, had been given 72 hours on Thursday to leave the country.

US intelligence says the Kremlin ordered a hack-and-release of Democratic Party and Hillary Clinton campaign staff emails in a bid to put Donald Trump in the Oval Office.

Obama also ordered the closure of two Russian compounds in New York and Maryland that the United States says were used “for intelligence-related purposes.”

Moscow has repeatedly denied the allegations.

President Vladimir Putin has ruled out sending home US diplomats in retaliation — a move interpreted as a sign he is looking to Trump to rebuild US-Russian ties after the US inauguration on January 20.

Trump has cast doubt on the US intelligence findings, saying he knows “things that other people don’t know” about the situation. The populist billionaire is seeking closer ties with Putin. CBB