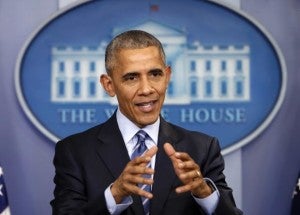 In this photo, taken Dec. 16, 2016, President Barack Obama speaks during a news conference in the briefing room of the White House in Washington. President Barack Obama has imposed sanctions on Russian officials and intelligence services in retaliation for Russia’s interference in the US presidential election by hacking American political sites and email accounts. (Photo by PABLO MARTINEZ MONSIVAIS/AP)

HONOLULU — In a sweeping response to election hacking, President Barack Obama on Thursday sanctioned Russian intelligence services and their top officials, kicked out 35 Russian officials and shuttered two Russian-owned compounds in the US It was the strongest action the Obama administration has taken to date to retaliate for a cyberattack.

“All Americans should be alarmed by Russia’s actions,” Obama said in a statement released while he was vacationing in Hawaii. He added: “Such activities have consequences.”

Obama ordered sanctions against two Russian intelligence services, the GRU and the FSB, plus companies which the US says support the GRU. The cybersecurity firm hired by the Democratic National Committee to investigate theft of its emails determined earlier this year the hacking came from the Fancy Bear group, believed to be affiliated with the GRU, Russia’s military intelligence agency.

The president also sanctioned Lt. Gen. Korobov, the head of GRU, and three of his deputies. Other individuals sanctioned include Alexei Belan and Yevgeny Bogachev, two Russian nationals who have been wanted by the FBI for cyber crimes for years.

Obama said the hacking “could only have been directed by the highest levels of the Russian government,” a contention the US has used to suggest Russian President Vladimir Putin was personally involved.

Although the White House announced at the same time it was kicking out Russian officials and closing facilities, it said those were responses to other troubling Russian behavior: harassment of US diplomats by Russian personnel and police.

The 35 Russian diplomats being kicked out are intelligence operatives, Obama said. The State Department said they were being declared “persona non grata,” and they were given 72 hours to leave the country.

The two compounds being closed down are recreational facilities owned by Russia’s government, one in Maryland and one in New York, the US said. The White House said Russia had been notified that Russia would be denied access to the sites starting noon on Friday.

Russian officials have denied the Obama administration’s accusation that the Russian government was involved at the highest levels in trying to influence the US presidential election. US intelligence agencies concluded that Russia’s goal was to help Donald Trump win – an assessment Trump has dismissed as ridiculous.

The move puts the president-elect in the position of having to decide whether to roll back the measures once in office.