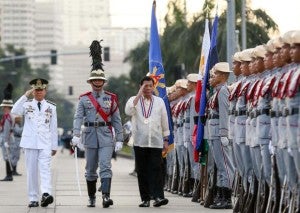 President Rodrigo Duterte (right) and Gen. Eduardo Año (left), AFP chief, review the honor guards at the commemoration of Rizal Day on Friday, Dec. 30, 2016, at monument of the national hero at Rizal Park in Manila. (Photo by Philippine Daily Inquirer)

Like Jose Rizal, Filipinos should be “willing heroes” and be united, as the country continues to be besieged, this time by illegal drugs, crime, poverty and corruption, President Rodrigo Duterte said on Friday.

As he honored the memory of the Philippines’ national hero, Mr. Duterte sought a period of national unity where citizens would cooperate, be patient and make sacrifices.

“As in his time, our country is still fighting for independence. But today, we are fighting for freedom from the bondage of poverty, crime, illegal drugs and corruption. Indeed, they are our present enemies; they are the modern invaders that subjugate our people’s hearts, minds and spirits,” Mr. Duterte said in his Rizal Day message.

All sectors must be involved in fighting these off in order to bring about change, he said.

“As our nation undergoes a significant phase of social development and economic growth, a period of national unity that calls for the cooperation, patience, and sacrifice of our people is necessary,” he said.

Today’s Filipinos should have the same fervor and dedication that moved Rizal to action, Mr. Duterte said.

“Let us therefore emulate the traits of Rizal; let us be willing heroes – patriotic, faithful and loyal to our motherland,” he said.

Filipinos are fortunate to enjoy the freedom that Rizal fought for, as well as the self-identity and honor that he believed Filipinos should defend, Mr. Duterte said.

Rizal should serve as a guide for future actions, he added.

“Beyond his prodigious and various talents, Rizal is best honored when we regard him as a beacon and moral compass in these challenging and perilous times,” Mr. Duterte said.

“This day of commemoration is a day of remembrance of his martyrdom so that we may also awaken and become our own heroes – committed to advocate good governance and uphold the rule of law; steadfast to end criminality and all forms of government corruption, and compassionate to the plight of the poor and less privileged,” he said.