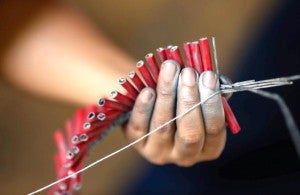 BOCAUE, Bulacan — The recent deaths of a fireworks trader, a soft drinks dealer, and a mother and her two children have become the latest evidence of the dangers attributed to fireworks and firecrackers, which health workers want to eliminate.

They died in accidents that struck Bulacan province in October and November, prompting the Duterte administration to stop factories and stores from producing and selling firecrackers for more than a month until their safety compliance was examined.

Many of the establishments have since been allowed to resume operations. They are now working double time to catch up with the rush for the New Year’s Eve revelry.

But the industry has endured worse-case scenarios. Even a nationwide ban when martial law was imposed in 1972 could not extinguish the flame of this controversial trade.

Fearing that firecrackers and pyrotechnic devices could be used in plots against the government, the dictator Ferdinand Marcos banned all pyrotechnic products.

The ban dramatically reduced the production of firecrackers, but some manufacturers operated underground and managed to improve their craft, said Celso Cruz, president emeritus of Philippine Pyrotechnic Manufacturers and Dealers Association Inc. (PPMDAI).

Their persistence was driven by the Filipino tradition of making noise with firecrackers during festivities. The belief that firecracker noise drove away bad luck proved to be too difficult to suppress from 1972 to 1986, and was one of the reasons the firecracker industry thrives to this day, Cruz said.

According to PPMDAI, the 1986 Edsa People Power Revolution that toppled Marcos from power helped pave the way for industry advocates to seek the legalization of fireworks manufacturing.

They succeeded in January 1992 when Republic Act No. 7183, or the Fireworks Law, was passed, allowing the production, sale and use of permissible types of pyrotechnic devices.

Cruz said the law was revived and amended to ensure  safety in the manufacturing and trade of pyrotechnic products in the Philippines. Many in the industry are banking on the safeguards now that a threat of another ban looms.

The pyrotechnics industry traces its origins to Bulacan. In 1867, Valentin Sta. Ana of Angat town mastered the craft of producing fireworks for fiestas, birthdays, Christmas and New Year celebrations.

The families of Jewel Canson and Florencio Gison Sr. of Iloilo  were also manufacturing fireworks then to celebrate different festivities in the province, the Negros provinces and Panay Island. Julian Pongasi of Lapu-Lapu City produced firecrackers and pyrotechnics devices in 1950.

PPMDAI records do not show whether the pioneers had chemistry training or where or how the chemicals used to develop explosives were sourced at the time.

But the traditional manufacturing process was passed on from generation to generation, eventually birthing the fireworks factories operating in the Bulacan towns of Bocaue, Santa Maria, Baliuag, Norzagaray, Angat and Meycauayan, as well as in Valenzuela City in Metro Manila and the provinces of Laguna and Cavite.

In the Visayas, many small factories sprouted in the cities of Iloilo and Bacolod, Hinigaran town in Negros Occidental province and in Cebu province.

In 1967, the industry became illegal following a fireworks-related accident in Meycauayan town in Bulacan that killed 26 people.

“We will need to speed up sales,” said Virginio de Silva, 73, owner of Biniong Fireworks in Barangay Pulong Buhangin in Santa Maria.

He said he might not be able to recover his capital, as his factory had yet to get the go-signal from the Department of Labor and Employment (Dole) to resume operations.

Biniong Fireworks produces firecrackers, such as sawa or “Judas’ belt” (a string-type of noisemaker containing 1,000 to 2,000 bangers).

“Hopefully we could bounce back from this financial loss,” De Silva told an Inquirer team during a visit to his factory on Dec. 9.

Biniong Fireworks was among the 88 factories that the Dole shut down on Nov. 24 following the firecracker-related accidents.

“We suffered a huge capital loss due to the work stoppage order. If we will be allowed to reopen our factory, there will not be enough time to recover our capital,” De Silva said.

The business is a family affair. De Silva’s children and relatives also help run the business.

Arlene Magsisi, De Silva’s daughter, said the business had suffered because of the stop order.

“Because of the suspension, our workers were forced to go back to the province. They will only starve here,” she said.

Philip Sanchez, 22, and Mark Daniel Gloria, 23, who have been working for De Silva for more than three years, said the suspension had affected them.

“We failed to send money to our families back home,” Sanchez said. He used to send P3,000 to P5,000 weekly to his parents in Mindoro province.

“I’m worried that this time I may not be able to send them money at all,” Gloria said.

“Biniong Fireworks has passed the safety inspection. They have hydrants that can be used in case of emergency. The distance between the work stations is within standards and that will help mitigate any explosion,” Valones told the Inquirer.

Monitoring is necessary, he said, adding that he was saddened by the explosion that killed a mother and her two children at a factory in Barangay Pulong Buhangin in Santa Maria on Nov. 23.

“The blast happened in an unauthorized work site. For a long time, we didn’t have firecracker-related accidents in our town because of our efforts to inform manufacturers about the safety standards set by the government,” Valones said.

Josefina Santiago, 54, owner of a firecracker stall at Pyro Zone in Barangay Turo here, said prices of pyrotechnic products were expected to increase as a result of the low production.

“Local firecracker products are like clothes that never go out of style and remain the bestsellers,” but 2016 is turning out to be the industry’s worst year, Santiago said.

“All of us suffered because of the mistakes of a few people. But these were accidents and nobody wanted them to happen,” Santiago said.

Store owner Herminia Camlian, 46, waited the whole morning of Dec. 9 for the first buyer at her shop in Binang 1st on MacArthur Highway here. Her store belongs to the first batch of establishments that were allowed to reopen.

Camlian said many products would not be available for the New Year celebrations because of the closure and stop orders.

Recently, he said, policemen confiscated sky rockets from a manufacturer in Bocaue who “did not attend any seminar or training on safe production.”

“The lack of knowledge of safety standards is the common reason there are accidents in the work stations and shops,” Caramat said.

Cruz said: “There should be no letup in monitoring the pyrotechnic industry. We should really be very strict. Inspection and evaluation of factories and stores should be continuous.”

The Bulacan Pyrotechnic Regulatory Board (PRB) was formed in 1999 to promote and protect the industry through stricter monitoring and supervision by government agencies.

Aside from the police, the PRB is composed of representatives from the Dole, Department of Trade and Industry, Department of Science and Technology, Technical Education and Skills Development Authority, Bureau of Fire Protection, the governor of Bulacan, and PPMDAI president.

The police and PPMDAI signed an agreement requiring  manufacturers and dealers to undergo a basic pyrotechnics chemistry course, and courses in the safe handling, transport and use of fireworks before they could be issued a permit.