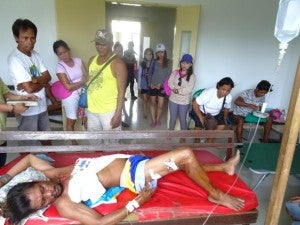 Rudy Bulfa, one of the victims of the Hilongos blast incident was treated at the Hilongos District Hospital. (Photo by VICKY C. ARNAIZ/Inquirer.net)

Moro terrorists may be behind the twin blasts that wounded 32 people in Hilongos, Leyte province, on Wednesday night, police and defense officials said, as President Rodrigo Duterte on Friday ordered an early solution to the attack that marred the Christmas holidays.

Suspicion has fallen on the Bangsamoro Islamic Freedom Fighters (BIFF) and the Maute bandit group following police determination that the bombs were 81-millimeter mortar rounds that were remotely set off by cell phones.

The BIFF and the Maute group share bomb-making technology, according to Defense Secretary Delfin Lorenzana.

Speaking to reporters on the sidelines of Rizal Day celebration at Rizal Park in Manila on Friday, Lorenzana said he believed the two groups, both under intense military pressure, could have pulled the Hilongos bomb attack as a diversionary tactic.

“It looks like they are employing diversionary tactics elsewhere to ease military pressure on them,” Lorenzana said.

Hilongos was celebrating its fiesta on Wednesday and at least 1,000 people filled the town plaza, watching an amateur boxing competition, when two explosions ripped through the crowd.

The first bomb, planted near a water tank, went off at 9 p.m. and the second, hidden near the stage, exploded a minute later.

Thirty-two people were wounded, most of them in the first explosion, police said. The second bomb, apparently poorly constructed, did little damage, they said.

A third bomb failed to explode. Hilongos Mayor Albert Villahermosa reported on Thursday that police found the unexploded bomb, also made from an 81-mm mortar round.

Speaking to reporters in Caloocan City on Thursday night, Philippine National Police Director General Ronald dela Rosa described the construction of the bomb as the “signature of the BIFF.”

A similar bomb went off at a night market in Davao City, President Duterte’s hometown, on Sept. 2, killing 15 people and injuring 70 others.

That attack was blamed on the Maute group, three of whose members were arrested on Oct. 2.

The Maute group is based in Lanao del Sur province, while the BIFF, an offshoot of the Moro Islamic Liberation Front with which the government has a ceasefire, is based in Maguindanao.

Lorenzana said Maute group members also lived in Maguindanao. “[T]hat could be their connection,” he said.

Dela Rosa said the Hilongos police were also looking at the possible role of a narcotics gang or of currency counterfeiters in the explosions.

Senior Insp. Alberto Renomenon, Hilongos police chief, said on Thursday that the bomb attack could be retaliation for the arrest in October of drug dealer Raida Ampaso Sarip.

Members of Sarip’s gang are still operating in Hilongos, he said.

Renomeron said the gang that was behind the circulation of bogus P1,000 bills seized by policemen in October was also a suspect in the bomb attack.

The President on Friday ordered the police to solve the bomb attack as soon as possible. He arrived in Hilongos at
10:29 a.m. to visit the victims at Hilongos District Hospital.