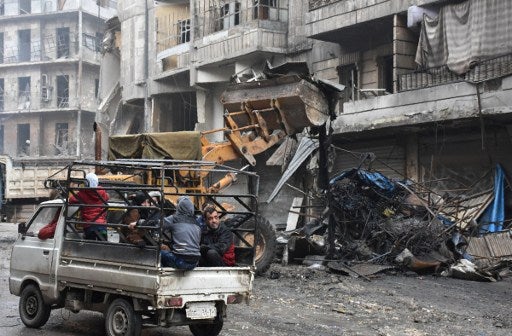 Syrian civilians drive past a tractor removing rubble as the Syrian government starts to clean up areas formerly held by opposition forces in the northern city of Aleppo on December 27, 2016, in the Shaar district. AFP

BEIRUT, Lebanon – Syria has been wracked by a devastating civil war for almost six years.

Peaceful pro-reform protests against the regime of President Bashar al-Assad, which began in March 2011, were met with repression, prompting an armed uprising that later descended into a multi-sided nationwide conflict.

More than 312,000 people have been killed in the war since 2011, according to the Syrian Observatory for Human Rights monitoring group.

Crackdowns follow in Damascus and Daraa in the south, cradle of the uprising.

The regime denounces “an armed rebellion by Salafist groups”.

In April, protests spread, with calls for Assad’s ouster.

out of Turkey to fight the regime. Islamist groups join the revolt.

On July 17, 2012 FSA fighters launch a battle for Damascus, but the government has held on firmly while rebels have surrounded the capital.

From 2013, helicopters and regime warplanes regularly drop barrel bombs on rebel districts in the northern city of Aleppo and the rest of the country.

From April 2013 the head of the powerful Lebanese Shiite movement Hezbollah, an ally of Iran, says it is fighting on the side of the Syrian regime.

Shiite Iran, for its part, strengthens military support for its ally Assad, who belongs to the Alawite sect, an offshoot of Shiite Islam.

On August 21, 2013 the regime is accused by the United States of killing more than 1,400 people with chemical weapons in two rebel-held zones near Damascus.

In September, Washington — which backs the rebels — and Russia — which backs Assad — agree on a plan to eliminate Syria’s chemical weapons, ruling out the threat of US strikes.

Rise of the jihadists

From 2013, jihadists, notably from the former Syrian branch of Al-Qaeda, the Al-Nusra Front, strengthened their grip on the north, at the expense of the FSA.

In 2014, the jihadist Islamic State group seizes swathes of territory in the north, overshadowing the anti-regime rebellion.

IS makes Raqa city the capital of the “caliphate” which it proclaims in late June in territories it controls in Syria and neighboring Iraq.

In September 2014, US President Barack Obama vows to build an international coalition to defeat IS.

On September 23, the US and Arab allies launch air strikes on IS in Syria.

Kurdish groups, which had in November 2013 announced the establishment of a transitional autonomous administration in northern zones, make with the help of coalition air strikes key territorial gains including Kobane on the border with Turkey in January 2015.

On September 30, 2015, Russia launches air strikes on Syria, saying its intervention is against “terrorist groups”, including IS. Rebels and their foreign backers say Moscow is targeting moderate regime opponents in a bid to bolster Assad.

The strikes help the regime, which has suffered a series of defeats since March 2015, to retake territory.

On August 24, 2016, Turkish troops launch Operation Euphrates Shield in the province of Aleppo to drive out IS, as well as Kurdish militias which are allied with Washington in the fight against the jihadists but considered by Ankara to be terrorists.

On September 22, the army announces the launch of a major offensive to retake the rebel-held east of the battleground city of Aleppo that it has besieged since July.

Syria’s second city and former economic capital had been divided since 2012 with western districts controlled by the regime and the east in rebel hands.

On November 15, the regime, backed by its allies, renews its assault, carrying out its fiercest bombardment for two years.

The regime recaptures the eastern sectors in a rapid advance lasting less than a month.

On December 22 the army declares it has full control of Aleppo, after the final convoy of civilians and rebel fighters left the last rebel pocket of the city under a withdrawal deal.

On December 29, Russian President Vladimir Putin announces a nationwide ceasefire deal to come into effect across Syria from midnight and that the warring parties have agreed to sit down for peace talks organised by Russia, Turkey and Iran.