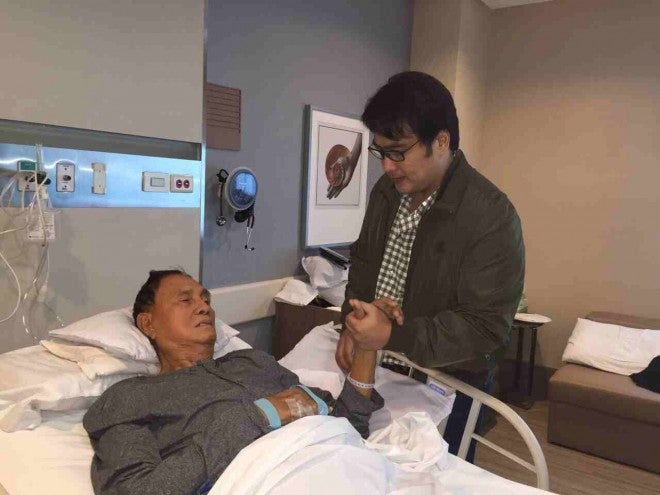 MANILA — With his father hospitalized again, detained former Senator Ramon “Bong” Revilla, Jr., has asked the Sandiganbayan for a second furlough this month.

In a two-page motion, Revilla said his father, former Senator Ramon Revilla, Sr., has been brought anew to, and confined at the St. Luke’s Medical Center in Bonifacio Global City for kidney and respiratory ailments.

The 89-year-old former actor-politician was confined since Dec. 22 and diagnosed with acute kidney injury secondary to interstitial nephritis (an inflammation of the tissue fluid between kidney tubules) and tracheo-esophageal fistula (an abnormal connection between the trachea and the esophagus).

Revilla explained that his father is set to undergo percutaneous endoscopic gastrostomy, a tube insertion procedure, because of his inability to eat. The elder Revilla has to be hospitalized for up to 10 days, or “until Jan. 3, 2016 [sic],” according to Revilla Jr.

Like his earlier motion, this request stated that Revilla “feels that it is his obligation to come to the aid of his father, who is very close to him, even by his mere presence, and cannot disregard a son’s natural urge and desire to visit and be with his ailing and weak father, and spend a few moments together, to provide former Senator Revilla, Sr., the needed assurance and support.”

Earlier this month, the First Division granted Revilla a six-hour furlough on Dec. 16 to visit his father, who was then diagnosed with severe sepsis secondary to pneumonia, a serious form of blood poisoning.

Revilla himself was confined at the upscale hospital from Nov. 5 to Nov. 12, after complaining of severe headache and nausea due to hypertension. His extended week-long stay was due to examination and a biopsy.

He and another former opposition senator, Jose “Jinggoy” Estrada, are detained at the PNP Custodial Center while facing the non-bailable plunder charges since June 2014.  SFM