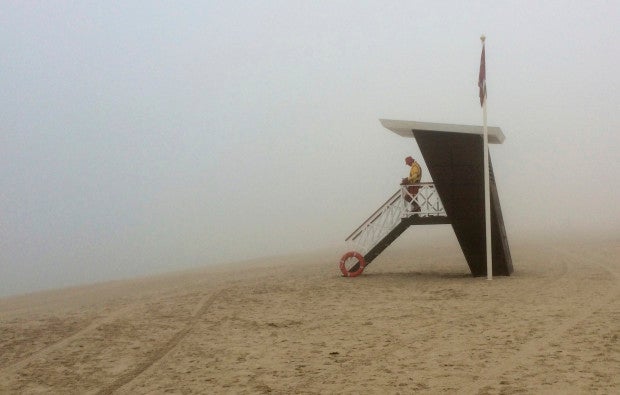 A lifeguard looks out at the fog covered empty Umm Suqeim beach, in Dubai, United Arab Emirates, on Dec. 28. AP

DUBAI—A heavy seasonal fog engulfed the skyscraper-lined skyline of Dubai for several hours, causing some flights to be delayed at the world’s busiest international airport.

At sunrise Wednesday, downtown Dubai was so foggy that even the outline of the Burj Khalifa, the world’s tallest building, could not be seen by passers-by. Fog also engulfed Abu Dhabi, the capital of the United Arab Emirates.

At Dubai International Airport, home to the long-haul carrier Emirates, flights were delayed by up to an hour. Delays also hit Abu Dhabi’s international airport.

The UAE’s National Center of Meteorology & Seismology earlier had warned that visibility Wednesday morning would be less than 50 meters.

High humidity and falling temperatures cause the fog to roll in seasonally along the coast of the Arabian Peninsula.