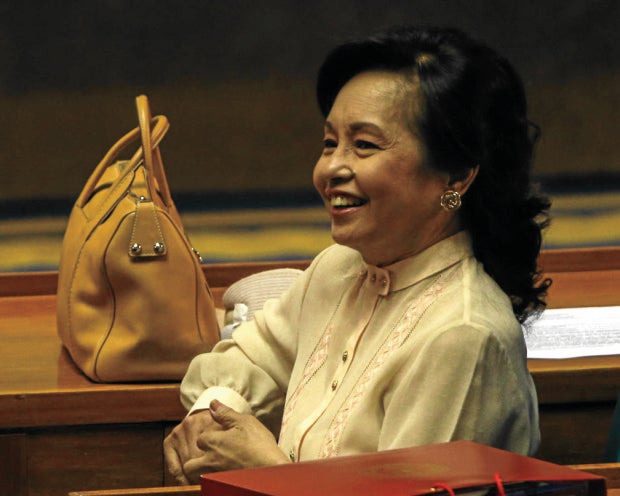 Former President Gloria Macapagal-Arroyo, now a Pampanga representative and House Deputy Speaker, is off the hook in the alleged misuse of P900 million from the Malampaya Fund for lack of evidence, her third legal victory since July.

But Ombudsman Conchita Carpio Morales approved the filing of criminal charges against Arroyo’s budget secretary, Rolando Andaya Jr., and agrarian reform secretary, Nasser Pangandaman, and 23 others over the scheme to divert royalties from Malampaya gas wells meant for agrarian reform beneficiaries affected by Tropical Storms “Ondoy” and “Pepeng” in 2009.

Andaya is now a Camarines Sur representative and also a Deputy Speaker, while Pangandaman is now mayor of Masiu, Lanao del Sur province.

The indicted individuals face two counts of plunder, 97 counts of malversation through falsification of public documents and 97 counts of violation of Section 3(e) of the Anti-Graft and Corrupt Practices Act for causing undue injury to the government and giving unwarranted benefits to private parties.

Morales’ finding of probable cause is subject to appeal.

The Ombudsman dismissed the criminal complaint against Arroyo, then Executive Secretary Eduardo Ermita, and two Department of Agrarian Reform (DAR) employees for “insufficiency of evidence.”

The resolution noted that the National Bureau of Investigation, which initiated the case in 2013, “failed to prove that they conspired with their correspondents . . . or that they deviated from the regular procedure in their individual capacities.”

Tuason returned P40 million to the government and turned state witness in the pork barrel scam involving Napoles and a number of lawmakers, but this did not save her from indictment for the Malampaya Fund scam in which she was accused of receiving a P242.8-million commission.

The staff of Napoles were said to have been directly involved in forging the signatures of the supposed beneficiaries of the projects.

Morales said 12 spurious nongovernment organizations (NGOs) linked to Napoles cornered the projects for 97 municipalities by fabricating letters of request from their mayors.

Ombudsman investigators, however, found the documents to be fictitious, as the agricultural kits never found their way to the intended beneficiaries.

Arroyo signed Executive Order No. 848 on Oct. 13, 2009, which expanded the use of the Malampaya Fund outside of the energy sector five days after Andaya made a request amid the disaster caused by Ondoy and Pepeng in much of Luzon.

The NBI found that Arroyo’s order paved the way for the NGOs to be funded for what would turn out to be ghost projects.

It said that even two months before Arroyo issued the executive order, Napoles had already instructed her staff to make the documents, including fake request letters from mayors, to be submitted to the DAR in order to “corner” the ghost projects.

The memorandums of agreement for the projects were signed by the mayors and agrarian reform undersecretary Nieto. He allegedly signed the checks that were released to and deposited in the bank accounts of the NGOs. The cash was then withdrawn and given to Napoles. —WITH A REPORT FROM ANA ROA, INQUIRER RESEARCH

IN THE KNOW: Malampaya Fund