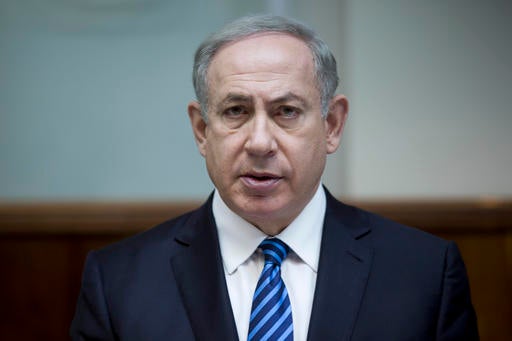 FILE – In this Dec. 11, 2016, file photo, Israeli Prime Minister Benjamin Netanyahu attends the weekly cabinet meeting at his office in Jerusalem. Netanyahu lashed out at President Barack Obama on Saturday, Dec. 24, accusing him of a “shameful ambush” at the United Nations over West Bank settlements and saying he is looking forward to working with his “friend” President-elect Donald Trump. Netanyahu’s comments came a day after the United States broke with past practice and allowed the U.N. Security Council to condemn Israeli settlements in the West Bank and east Jerusalem as a “flagrant violation” of international law. ObaAbir Sultan, Pool via AP

JERUSALEM — Israel is stepping up its attacks on the Obama administration, saying it has proof from Arab sources that the U.S. actively helped craft a U.N. resolution that declared Israeli settlements illegal.

Israel is livid about the resolution, which gave the Palestinians a major diplomatic victory.

The Palestinians are hoping the resolution will give them momentum at a French-hosted Mideast peace conference scheduled next month.

Keyes says Israel will not join the conference.