More than 300,000 displaced by Typhoon Nina—NDRRMC 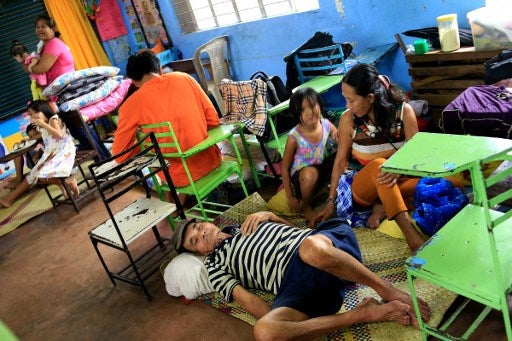 Residents sit inside a classroom at the Central Elementary School which was turned into an evacuation centre in Santo Domingo, Albay province on December 25, 2016 due to approaching Typhoon Nock-Ten.
Thousands of residents were fleeing coastal and other hazardous areas in the eastern Philippines on December 25 as a powerful typhoon barrelled towards the disaster-prone archipelago. AFP PHOTO

Over 300,000 persons were displaced from their homes due to Typhoon “Nina” (international name: Nock-Ten), the National Disaster Risk Reduction and Management Council (NDRRMC) said.

A report from the NDRRMC on Monday said that 77,560 families or 383,097 persons were preemptively evacuated from Calabarzon, Bicol Region, Mimaropa and Eastern Visayas in anticipation of the typhoon.

Power outage was also reported in 83 areas in Mimaropa and Bicol region for precautionary measures.

Mina Marasigan, NDRRMC spokesperson, said that the weather has improved in Bicol region and those stranded in ports will be allowed for sea travel.