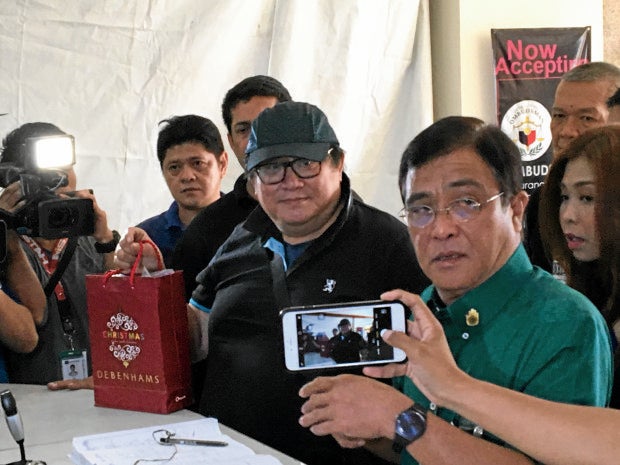 Alleged illegal gambling middleman Wenceslao Sombero Jr. has turned over to the Office of the Ombudsman his purported P2-million share of the P50 million supposedly extorted from gambling tycoon Jack Lam by two former immigration officials.

Sombero surrendered the plastic-wrapped cash on Thursday afternoon as part of his evidence in the graft case he filed on Dec. 16 against resigned Bureau of Immigration (BI) Associate Commissioners Al Argosino and Michael Robles.

Argosino and Robles earlier explained that they accepted the money to be used as proof of Lam’s bribery of government officials and of corruption by other immigration officials. They turned over P30 million of the total to Aguirre weeks after they were caught on closed circuit television camera accepting the cash.

Sombero turned over the P2 million to the Ombudsman’s office just hours after sacked BI intelligence chief Charles Calima Jr. filed a plunder and graft complaint against the two former immigration officials, also with the Ombudsman.

Sombero and Calima, both former police officers, described their involvement in the alleged extortion of Lam as a “deception operation” meant to entrap Argosino and Robles.

Sombero said he kept his “share” of the extorted sum to “close the loop” and build up a case.

“When I say there’s a loop, sometimes, there’s a hole. To plug that hole, you need to see part of the money, which is why we held the operation,” he told reporters.

“This is huge proof,” he added, referring to the cash. “Coming from a former intelligence officer of the CIDG, I’m certain that it is strong evidence if I’m able to get some of the P50 million.”

Sombero said he opted not to conduct a citizen’s arrest on Argosino and Robles as soon as the payoff was made on Nov. 27, passing it up for a chance to gather more evidence.

He said there would have been a follow-up entrapment operation during the handover of another P50 million on Wednesday, Nov. 30, but this did not push through as the two commissioners allegedly asked for a larger amount that could only be given the next day.

In his 16-page plunder complaint, Calima said it was Sombero, president of the Asian Gaming Service Provider Association (Agspa), who informed him that some BI officials are “humihingi ng areglo (asking for settlement)” for the release of Chinese nationals arrested for illegally working at Lam’s online gambling outfit in Clark Freeport Zone, Pampanga.

Calima said the two immigration officials were caught on camera carrying paper bags containing money inside the City of Dreams casino, but he wanted harder evidence to pin them down.

He claimed he met Argosino and Robles to inform them of Sombero’s plan to expose the alleged extortion, which Inquirer columnist Ramon Tulfo also had information about. Argosino allegedly asked for Calima’s help to stop Sombero and Tulfo from going public.

Argosino made plans to pay off Calima, Sombero, Tulfo, BI chief Jaime Morente, and a certain Colonel Chan. The deliveries were allegedly made on Dec. 9, according to Calima.

Calima claimed the two officials left two paper bags containing P18 million with him and told him, “Bahala ka na dito (What to do with this is up to you).”

The way the money was originally divided—P24 million each for the two officials and P2 million for Sombero—led Calima to conclude that, “In truth and in fact, the extortion attempt was just for their (Argosino’s and Robles’) own benefit, as shown by the equal sharing which they did to the money.”

In an interview with reporters, Sombero’s lawyer Ted Contacto said “the P2 million returned by Mr. Sombero is exactly the same money withdrawn from the casino.”

In an “extremely urgent” letter, Aguirre asked CIDG Director Chief Supt. Roel Obusan to hand over to the Department of Justice the P18 million “considering that the BI and the officials concerned are under the administrative supervision of the Secretary of Justice.” He said this will be for safekeeping and evidence of the alleged extortion.

Aguirre also requested copies of other “documents and evidence” that Calima had submitted to the CIDG, “as well as the result of your (CIDG’s) investigation, initial or otherwise, which will be used to augment the NBI’s parallel probe.” —WITH A REPORT FROM TARRA QUISMUNDO