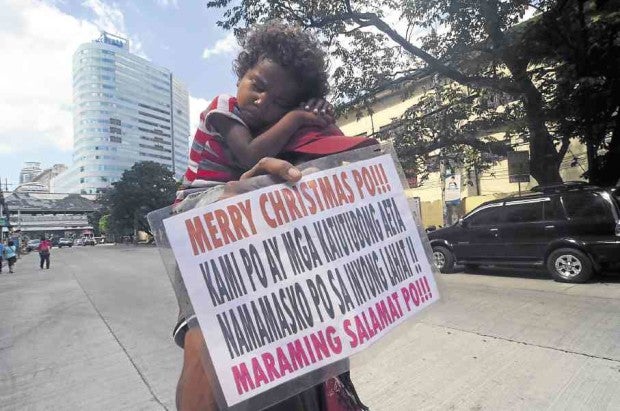 Social workers are thinking of ways to stop the annual influx of beggars to Metro Manila and nearby provinces during the Christmas season, particularly those belonging to Aeta and Sama-Bajau ethnic groups.

Entire Aeta communities from Central Luzon and Sama-Bajau tribespeople from Zamboanga apparently organize themselves to make the seasonal trip.

“They have social preparations. By September they begin to look for jeepneys they will rent. They put up signs saying it’s an ‘excursion’ or an ‘educational trip,” Quezon City social welfare coordinator Nonie Metran said.

“We have to see who teaches them to do that. Their printed signboards of ‘Merry Christmas’ are also well made,” he added.

Last week, the Quezon City government rounded up 237 Aetas living and begging along CP Garcia Street and Katipunan Avenue, near the University of the Philippines Diliman campus.

Metran said they were able to talk to the Aetas’ leader, a certain Mr. Batictican, who struck a compromise wherein his people will voluntarily return to their provinces if they will be provided with buses and not brought to government shelters.

The Aetas were provided with buses that took them back to Camiling in Tarlac;  Subic, in Zambales, and Pangasinan.

Edwin Villanueva, pastor of the Pampanga-based God’s Love for the Indigents Ministry, said they found out that groups of Bajaus who travel by ship from Zamboanga or Sulu meet up first in Batangas or Laguna.

“They have a reunion in Central Luzon,” he said.

Secretary Judy Taguiwalo of the Department of Social Welfare and Development (DSWD) welcomed a suggestion for social workers and civic groups to go to Aeta and Sama-Bajau communities well before Christmas to bring gifts so that the indigenous peoples will no longer feel the need to go begging in Metro Manila.

“Why don’t we bring people to their villages? We can come up with a gift-giving drive to the barangays of Aetas so they do not need to come here, or if they want to come here it’s really for an excursion sponsored by a corporation,” Taguiwalo said. “We can come up with that kind of program. We have one year to prepare.”

DSWD Director Thelma Biolena recalled that years ago they were able to convince the chieftains of the Mangyan natives in Mindoro not to bring their people to Metro Manila to beg, after local officials provided them with livelihood support.

The DSWD has asked the public not to give alms to street children and other street-dwellers but instead donate to charities that help street children.