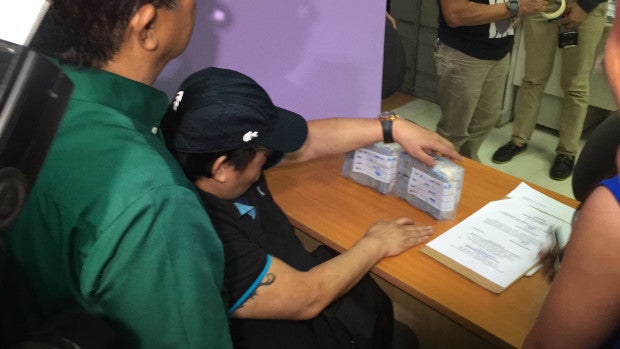 Sombero went to the Ombudsman around 1:30 p.m. carrying a red paper bag containing his P2 million cut from the P50 million allegedly extorted from Lam by sacked Immigration associate commissioners Michael Robles and Al Argosino, who both resigned at the height of the extortion allegations.

His lawyer Atty. Ted Contacto said the P2 million was being surrendered to the Ombudsman as evidence.

Sombero surrendered the money after he filed last week a graft complaint against Robles and Argosino for bad faith, manifest partiality and gross inexcusable negligence for causing undue injury to government, punishable under Section 3(e) of the Anti-Graft and Corrupt Practices Act.

In an interview after he surrendered the money, Sombero claimed he “preserved” the P2 million money as evidence that money changed hands for Robles and Argosino from Lam in the entrapment operation Sombero supposedly carried out with Immigration intelligence chief Charles Calima.

(I and Gen. Calima sacrificed the safety of our lives, family in conducting this operation even though we are facing heavyweight enemies.)

(The P2 million I turned over today, is evidence that money changed hands.)

Sombero said he and Calima have always been supportive of the anti-corruption drive of President Rodrigo Duterte.

Calima earlier filed a plunder complaint against Robles and Argosino.

Contacto said the P2 million Sombero surrendered is the same money received as a cut from the P50 million extorted from Lam.

(The P2 million Sombero turned over is the same money withdrawn in the casino. Take note of the Chinese characters.)

Asked why it took him some time to surrender the money, Sombero said he went abroad to mull over his next steps after he received the P2 million.

His lawyers tried to stop him from explaining further, but Sombero entertained the reporters’ questions and admitted that he took the time off to mull things over and went abroad, only to return to the country to return the P2 million and file a graft complaint.

“Nagmuni-muni ako. Hindi ordinaryo ang kalagayan ko that day,” Sombero said, ignoring the gestures of his lawyers trying to stop him from speaking any further.

(I mulled things over. I was not under ordinary circumstances then.)

He said he took some time to observe the actions of Robles and Argosino, who surrendered P30 million to the Department of Justice before Sombero surrendered his P18 million to the Criminal Investigation and Detection Group of the Philippine National Police.

(I was still observing their actions. The money we got, it’s very hard evidence, the same money withdrawn. We are just waiting what was the mood.)

Sombero said he left the country around the time President Rodrigo Duterte ordered the arrest of Lam. Sombero then returned less than a week later to file the graft complaint against Robles and Argosino.

Sombero said he kept the P2 million to preserve it as evidence and strengthen his graft complaint.

“By getting a part of the money will strengthen the case. Same thing Gen. Calima did,” Sombero said.

Robles and Argosino allegedly received bags of bribes from Sombero, who represented Lam, for the release of 600 of 1,316 overstaying Chinese nationals who were arrested for illegally working at Lam’s online casino at Fontana Leisure Parks and Casino in Clark, Pampanga.

But the two reasoned that they collected the money as evidence of corruption. They returned the bribe to Justice Secretary Vitaliano Aguirre II.

Sombero filed the graft complaint after the Inquirer reported that he handed to the two commissioners five paper bags containing P10 million each, caught on closed-circuit television at the City of Dreams in Parañaque City last Nov. 27.

Aguirre has recommended the termination of the services of the two immigration officials, who are fraternity brothers of President Rodrigo Duterte, as well as Calima. They have since resigned from their posts.

Aguirre earlier alleged that Sombero tried to bribe him in a Nov. 26 meeting when Sombero supposedly asked Aguirre to be the “ninong” of Lam in government.

In an interview after he filed the graft complaint, Sombero admitted that he handed over P50 million to Argosino and Robles as “goodwill money.”

“I was shocked. Hindi ko naintindihan. ‘Paano ba tayo diyan, paano kikita diyan,’ (I was shocked. ‘How do we earn from this one?’) something like that,” Sombero quoted the commissioners as saying.

“I did not expect that. The reason why Jack Lam and Aguirre agreed on that meeting was because it’s very clear, no financial consideration,” he added.

Asked about the P2 million he allegedly received as a cut or “balato,” Sombero said the money was for the organization of a legal team to assist the overstaying Chinese nationals.

He denied earning kickbacks from the extortion try.

After they were accused of extorting from Lam, Argosino and Robles also filed a case of corruption of public officials and violation of the Anti-Wiretapping Law  before the Parañaque Prosecutors Office against Sombero, Lam, Calima and two Chinese interpreters, who were present during the meeting with Aguirre. RAM/rga