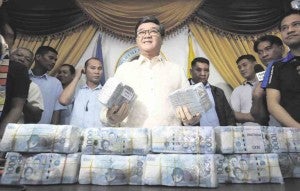 The two associate commissioners of the Bureau of Immigration tagged in a P 50-million extortion controversy have resigned from their posts, effectively immediately.

In a joint statement issued on Friday night, Associate Commissioners Al Argosino and Michael Robles said they were tendering their resignation immediately to spare President Rodrigo Duterte from concerns brought about by the scandal. 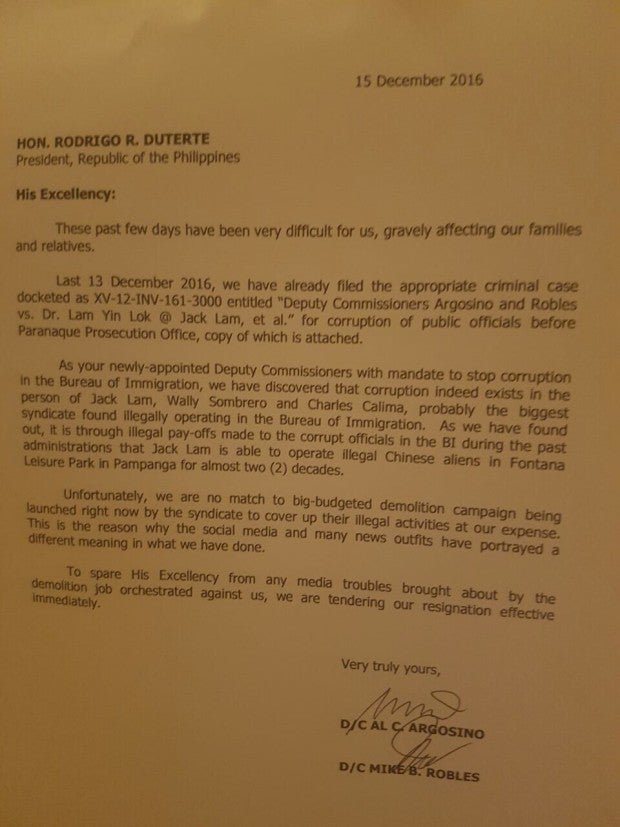 Letter of resignation of Al C. Argosino and Mike B. Robles

“To spare the honorable President from the troubles brought about by the false allegation hurled by Wally Sombrero, we are tendering our resignation effective immediately,” they said in a text message to the Inquirer.

Argosino and Robles were accused of extorting P50 million from Macau-based online gambling tycoon Jack Lam in exchange for releasing 600 out of 1,316 Chinese, allegedly working illegally for Lam.

The Chinese nationals were arrested last Nov. 24 at the Fontana Leisure Parks and Casinos in Clark, Pampanga, where they were allegedly working at an unlicensed online gambling hub owned by Lam.

Later on, the two immigration officials were caught on CCTV camera receiving P30 million from Sombero at the City of Dreams.

Argosino and Robles have denied the allegations of corruption, saying they were independently investigating the corruption within the BI.

The remaining amount was turned over to the Department of Justice (DOJ).

The two officials even filed corruption and wiretapping charges against Sombero, Lam, Calima, and Lam’s two interpreters before the Parañaque Prosecutors Office.

On the other hand, Sombero filed a criminal complaint against the two officials before the Office of the Ombudsman.

In their joint statement, Argosino and Robles said the past few days had been very difficult for them and their families.

They added that they also learned of the case that Sombero filed against them before the Office of the Ombudsman on Friday.

“Now that both cases have already been filed, it is time for the truth to prevail,” they said. –ATM

BI execs say they were only probing corruption