2 men nabbed for delivering ‘gift’ bag with shabu worth P28.5M 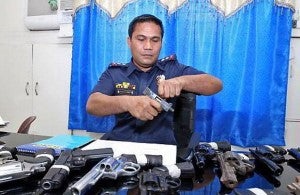 CEBU CITY —Wanting to have money for Christmas, two men agreed to deliver for another man a paper bag decorated like a Christmas gift without knowing what was really in it.

So Friday, at around 6 p.m., Roljoy Rosette, 33, and Joshel Delfin de Jesus, 28, delivered the “gift” to the recipient on Sixth Street at the North Reclamation Area in Cebu City.

The recipient turned out to be an undercover police officer – and inside the paper bag were two large packs of metamphetamine hydrochloride, or shabu, weighing a total of two and a half kilograms and valued at P29.5 million, according to an estimate of the Dangerous Drugs Board.

After handing over the bag, the undercover officer gave them another paper bag that contained bills.

At this point other cops came out and arrested them.

The two men will be sued for violating the Comprehensive Dangerous Drugs Act of 2002, a nonbailable offense, according to Supt. Fermin Armendarez, deputy chief of the Criminal Investigation and Detection Group in Central Visayas (CIDG-7).

The complaint will be filed against the suspects before the Cebu City Prosecutors’ Office next week.

“We were just requested to deliver this one,” Rosette, a driver of a motorcycle-for-hire, told reporters.

He said it was a male passengers requested him to deliver the paper bag to another man who would pick it up on Sixth Street in Barangay Carreta.

The passenger, he said, promised to give him P1,000 after the delivery.

“Had I known that the paper bag contained shabu, I would not have agreed to deliver it. I really had no idea what its content was,” Rosette, a resident of Barangay Quiot, said.

He said he didn’t know the passenger’s name but he could remember his face.

He said the passenger gave him P250 as taxi fare.

Rosette said he requested his friend De Jesus, a construction worker, to accompany him in delivering the paper bag.

In his own defense, De Jesus said he agreed to accompany Rosette, hoping that he too would get P1,000 from the passenger.

“We could use the money this Christmas,” De Jesus said.

But Armendarez said, CIDG-7 received an information four months earlier that the suspects had been selling large amounts of shabu.

The CIDG-7 agents transacted with the suspects but the latter allegedly refused to deal with them early on.

“They were very elusive,” Armendarez said. “But we did not give up until they finally gave in to our request at around 2 p.m. today (Friday).”

He said agents would start tracing who the suppliers of Rosette and De Jesus were.

“We also would want to know if it was really them whom we talk to before the operation,” Armendarez said.

He said he believed there were still individuals who continued peddling shabu despite the relentless campaign against illegal drugs of President Rodrigo Duterte.

“That has been their source of income. They will really find a way to continue their operations especially that Christmas is approaching,” Armendarez said.

Rosette and De Jesus are currently detained at the CIDG-7 stockade.

According to the records of the Police Regional Office in Central Visayas (PRO-7), police confiscated a total of P99.1-million worth of shabu in the region from July 1 to Dec. 1.

At least 4,306 drug suspects hav been arrested in various police operations, while 91,856 drug dependents and peddlers have surrendered to authorities.

A total of 149 drug suspects have been killed in police operations, while 219 have been gunned down by unknown assailants. -ATM