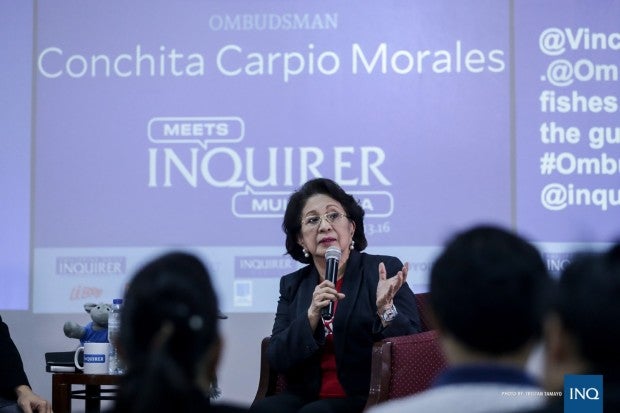 For those plotting to put Ombudsman Conchita Carpio Morales out office, the feisty chief graft buster has one message: “Go on, baby.”

Amid talk of impeachment moves against her, Morales on Tuesday struck a defiant tone, reiterating that she is unfazed by threats to have her removed by the supermajority of administration allies in Congress.

During the Meet the Inquirer forum on Tuesday, Morales confirmed that she has heard rumors of impeachment moves by Congress, dominated by a supermajority of allies of President Rodrigo Duterte.

“Yes I have, and I don’t think there is any interference,” Morales said when asked if she has heard of impeachment rumors and if she considers this as the Duterte administration’s way of interfering with the Ombudsman.

Morales said she was not scared to face any such moves against her.

“If they intend to scare me, I’m sorry. They’re disappointed. I can always resign if I wish but not under the circumstances,” Morales said.

Morales said she is “baffled” some persons interested in the Ombudsman post want her impeached for such a “thankless job” as the country’s-graft buster.

“Why they are interested baffles me. It’s beyond understanding. This is a thankless job, sometimes I say I am a masochist,” Morales said.

But the retired Supreme Court justice appointed as Ombudsman in 2011 by former president Benigno Aquino III said she has learned to take on the challenge of going after corrupt officials.

“After five years, I’ve learned to enjoy the challenge this job provides. If they wish to impeach me, go on baby, you’re free to do that,” Morales said.

Morales said she considers the Ombudsman post as more challenging than her stint as a Supreme Court magistrate because at the Ombudsman, she gets to make the final decision, whereas as Supreme Court justice she was only one member of the high court sitting en banc.

“It’s still the Ombudsman which finally decides whether you go this way or that, whereas the Supreme Court in a division of five you decide on a case. There are 15 of you who decide on a case,” Morales said.

“That’s why it’s more rewarding to be an Ombudsman, the difficulties notwithstanding, because you are alone, you take responsibility for any decision you make,” she added.