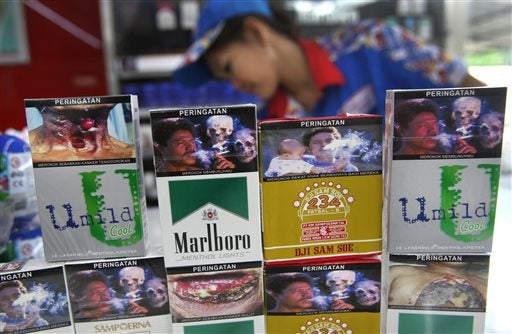 MANILA — The House of Representatives on Tuesday approved a controversial bill imposing a two-tier tax regime on tobacco products on third and final reading, drawing objections from lawmakers who questioned the inordinate haste of its passage.

By a 176-30 vote, with three abstentions, the chamber passed the measure taxing low-priced cigarettes at a rate of P32 per pack and premium brands at P36 per pack.

The two-tier rate — reportedly strongly lobbied by Mighty Corp., which produces low-priced tobacco products — is a departure from an earlier version imposing a single-tier tax at P30 per pack across the board.

“The unitary tax system will make it much easier for the DOF to collect much needed revenues… Having a two-tiered system, making cigarettes cheaper especially for youth is like dangling lollipop to children… That is not doing our countrymen a favor,” she said.

“All over the world, sin tax measures are going up, not going down,” Cayetano said.

Albay Rep. Edcel Lagman noted that the ways and means committee only took two meetings to approve the bill.

He said the unitary system “is the taxation of choice of so many countries, including Australia, Japan, Ireland and Thailand, and it is considered a best practice globally.”

“All of the principal players in the cigarette manufacturing industry, except Mighty Corp., were against House Bill 4144,” he said.

The congressman described the measure as a “grossly discriminatory tax measure because it principally, if not solely, favors Mighty Corp., which produces low-grade and low-priced cigarettes.”

Negros Oriental Rep. Arnolfo Teves said the law should be equal to all, arguing that the two-tier taxation meant consumers would gravitate toward the low-priced cigarette brands.  SFM